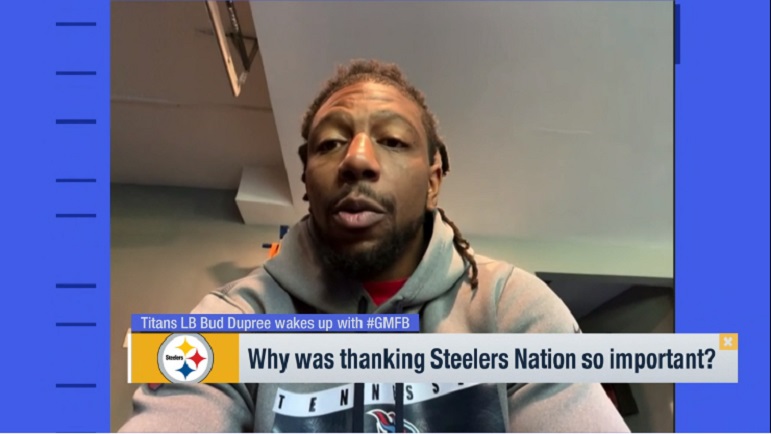 The Tennessee Titans signed outside linebacker Bud Dupree away from the Pittsburgh Steelers earlier in the offseason. On the heels of that happening, the former first-round draft pick out of Kentucky penned a very heart-felt letter to Steeler Nation on The Players’ Tribune. On Wednesday, Dupree, who is now putting the finishing touches on his rehab from the serious knee injury that he suffered late last season as a member of the Steelers, was a guest on NFL Network’s ‘Good Morning Football’ show. During his interview he was asked about that Players’ Tribune letter that he wrote several months ago and why it was important for him to do that.

“It was important for me to do that because those guys showed me nothing but love the whole time,” Dupree said. “You know, once they accept you in that city, man, they accept you for life. So, you know, I’ve got a lot of great friends in that city, I’ve got a lot of great friends that are still on that team. Even the coaching staff and the medical staff that’s in there, man, you know all of those people, they’re like my real people. So, at the end of the day it ain’t nothing fake over there, man, it’s all genuine. And I’m a genuine person, too, so once we’re in it, we’re in it and we’re in it for the long haul, man. And there’s one thing about me now, everybody who knows me in their area, they’ll tell you the same thing. So, you know, man, it’s always going to be love for those guys.”

While Dupree might now be with a new team and in a different city, he said on Wednesday that he still likes to keep in touch with several people back in Pittsburgh.

“And you know, we still pick up the phone and call a couple of people, still sending a couple of texts out just to make sure everybody is on point, everybody’s good,” Dupree said. “But now I’m trying to bring that same touch that I had in Pittsburgh to Tennessee. That’d be another step for me to be another great attribute there, too.”

Dupree didn’t stop there when it came to talking about the Steelers, however, as he also referenced how is time in Pittsburgh resulted in him becoming more of a team leader.

“Being on the Steelers, man, there was a lot of older guys that was already in the group and in the groove,” Dupree said. “So, you know, once those guys started retiring and getting phased out of the way, now they look for the younger guys to come in. And you know, being on the team, the oldest guys that we had were like Cam Heyward and Joe Haden, they were the older ones that was really in the group. So, it was upon them guys like me, T.J. [Watt] Minkah [Fitzpatrick], Vince Williams to come in and especially when [Ryan] Shazier went down. And we had to put it upon our plate to group the team together to make sure everyone is one and everyone was on the same page. So, that’s a part of it. And then also, man, just wanting to make more plays, put more stuff on my shoulder, be able to go out there, you know, help the team to victory.”

Those are some extremely nice words that Dupree said about his former team, and you can really tell that he cherished his time that he spent with the Steelers in Pittsburgh. Dupree is of course now a member of the Titans, and he’ll likely be a cornerstone for their defense for at least the next few years.

With the Titans set to start their annual training camp in roughly a month from now, Dupree is now focusing on finishing up the rehab on his surgically repaired knee. Will he, however, be ready for the start of the regular season?
“So, you know, I’m working hard to be back as soon as I can, but it’s up to the coaching staff at the end of the day, like when they want me to be on the field and how comfortable they feel with me coming off the injury,” Dupree said.

While it’s yet to be seen if Dupree will indeed be ready for the Titans first game of the 2021 season, he certainly should be back on the field playing again come time that the Steelers host Tennessee at Heinz Field in Week 15 action. With that, you can probably bet that Dupree has that contest and homecoming of sorts circled on his calendar right now.