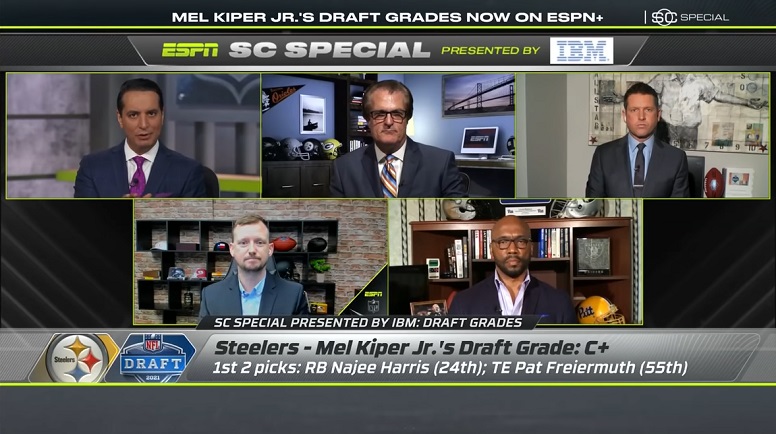 There certainly are quite a few opinions on the Pittsburgh Steelers 2021 draft class that included nine players this year. Most of them seem to be not overly favorable ones, especially when it comes to major media analysts. On Saturday, ESPN’s Mel Kiper Jr., Todd McShay, Louis Riddick and Matt Miller joined Kevin Negandhi on the SportsCenter 2021 NFL Draft Grades Special to discuss the Steelers’ 2021 draft haul. You can watch that full segment below.

Of the group, Kiper is the least impressed with the Steelers’ 2021 draft haul.

“For the Steelers, Najee Harris, I’m against running backs [in the first round], but I like Harris,” Kiper said. “After that though, Pat Freiermuth is a decent tight end, a number of reaches. Matt Miller talked about some reaches, they had a few there as well. B, Buddy Johnson in round four, Isaiahh Loudermilk can play, but in the fifth round. And Quincy Roche, pass rusher out of Miami, formerly at Temple, maybe he in the sixth round emerges as a guy who makes this draft look a little bit better on paper than it does right now.”

Another interesting recap of the Steelers 2021 draft class came courtesy of Riddick, who of the four in the ESPN segment is the one I have the most respect for.

“I love Najee Harris,” Riddick said. “I love him. I don’t think Pat Freiermuth all of a sudden is the answer. I didn’t see a guy who was really going to be someone who was a game changer in the run game and definitely not in the pass game. And I’ll tell you this, Kendrick Green, who they drafted in the third round, I know they’re going to probably plug him in at center and have him play there and they need somebody to take the place of Maurkice Pouncey, who was one of the very best in the league for a long time. I think he’ll be serviceable.

“But I just don’t see the improvement upfront, which is where Pittsburgh has always made its name and where Ben [Roethlisberger] needs them to make their name now because he can’t carry this football team on his shoulders anymore. And he definitely cannot escape the pass rush like he used to. So, if they are not more secure on the edges, this team’s going to be in trouble. The defense can’t win it all for them. So, I’m just wondering if this offensive line is going to be able to develop and make them more two-dimensional.”

You can see what McShay and Miller had to say about the Steelers’ 2021 draft class as well by watching the video below. Miller, by the way, is a huge hack and in no way deserves to be listened to. He’s been busted not really watching tape countless times over the years. He’s also scammed people out of a lot of money on Twitter as well.