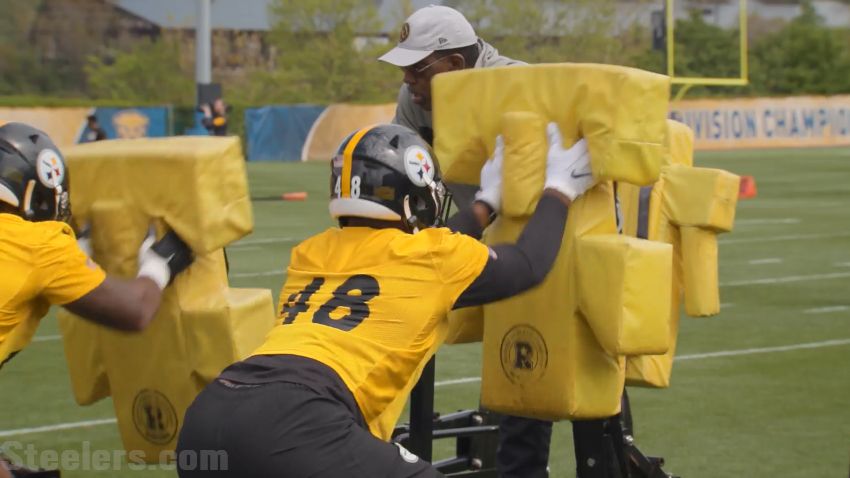 Quincy Roche was as surprised as anybody when he found himself still on the board by the time the Pittsburgh Steelers’ sixth-round slot was on the clock during the 2021 NFL Draft. The Miami-by-way-of-Temple pass rusher has appeared on numerous ‘draft steal’ lists over the course of the past couple of weeks.

Aside from the fact that he changed schools and put up somewhat limited numbers last season at Miami, one of the reasons that he may have fallen would be due to teams viewing him primarily as a pass rusher. He acknowledged following today’s rookie minicamp practice that he has some work to do in terms of supporting the run.

“That’s something I’m definitely ready to work on”, he said of his run defense. “I wouldn’t consider myself one-dimensional; I can play the run. Of course, I’ve got improvement [to make]. We’ve actually already started working on it. I’m just trying to get better every day, one percent every day. I can’t wait to see what the future holds”.

Roche, who will wear Bud Dupree’s number 48, is a key addition at this time, given the free agent losses of the aforementioned, as well as Ola Adeniyi. With 2020 third-round pick Alex Highsmith already being pushed into the starting lineup next to T.J. Watt, the Steelers’ depth on the edge has gotten precariously thin, with only veteran journeyman Cassius Marsh having NFL experience.

But they were fortunate to find an intriguing late-round prospect like Roche, who does have that upside that you like to see. While he is not a superior athlete, he has the capacity of developing into a technician, which is one of the reasons there should be optimism about his ability to match his run defense to his ability to work offensive tackles in the pass rush.

Dupree, having signed with the Tennessee Titans earlier this offseason as an unrestricted free agent, was one of the Steelers’ best run defenders. While the brunt of the responsibilities certainly will not fall on his shoulders, this makes it all the more important that Roche make strides in this area, in the hopes of avoiding a significant drop-off in the team’s overall run defense compared to last season when he is on the field.

So far, Roche acknowledging that they are already working on his run defense is one of the very few things we have heard from players in the affirmative in the very early stages of the in-person offseason phase. We have had a lot of ‘we haven’t gotten to that yet’ responses, which is of course typical, but it’s refreshing to deviate from that routine.