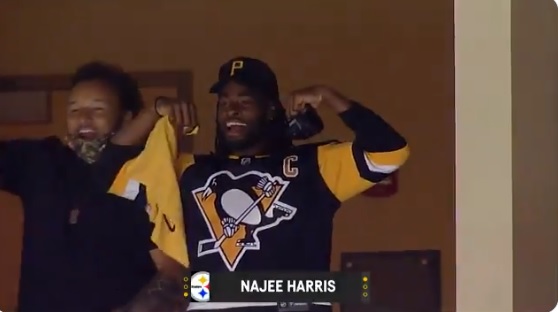 Najee Harris is unleashing his inner Yinzer, showing up at tonight’s playoff game between the Pittsburgh Penguins and New York Islanders. Earlier Monday, Harris tweeted he would attend tonight’s game and true to his word, he – along with third round pick Kendrick Green – was there.

Harris is in his first hockey town after growing up in the Bay Area and playing college ball at Alabama. And he’s getting a taste of what Pittsburgh’s sports are all about, rocking the Pens’ jersey/Terrible Towel/Pirates’ hat, the triple word score of Pittsburgh apparel. In other words, he’s everyone’s uncle who also just happens to be the Steelers’ latest first-round pick.

It’s great to see Harris immediately get involved in the community and connect with the fanbase. Not that there were questions or concerns about it. Since being drafted, several times Harris has discussed wanting to get involved with the Pittsburgh community. He’s started up a non-profit and has actively sought out ways to make an impact those around him.

All in all, Harris checks the “hearts and smarts” box of what the Steelers look for. If he accomplishes what he’s expected to do on the field, he’ll be a home run pick.

The Pens are playing Game 5 of the first round of the NHL playoffs. Their series against the Islanders were tied at two heading into Monday’s game. As of this writing, the Pens hold a 2-1 lead at the end of the second period. Evgeni Malkin and Bryan Rust have the two goals for Pittsburgh.