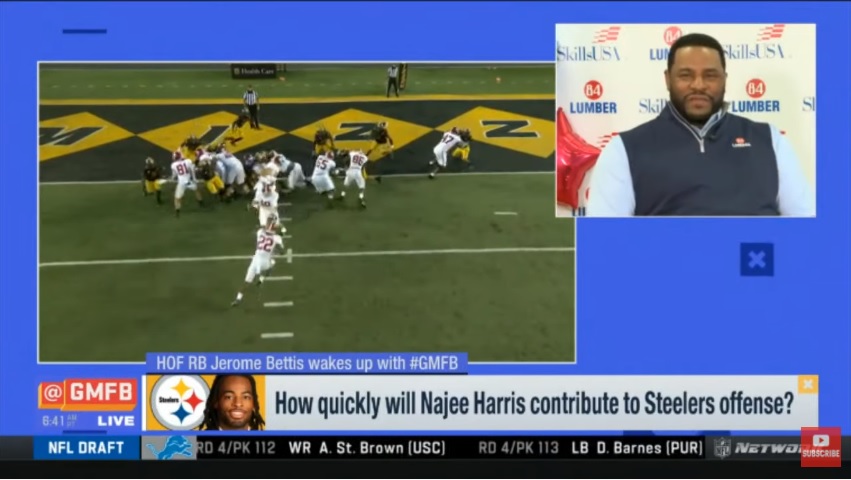 Consider him a tad biased when it comes to all things running back. But Jerome Bettis is over the moon that the Pittsburgh Steelers drafted Najee Harris in the first round of last week’s draft. To Bettis, this is the Steelers realizing they must return to their roots.

“I was ecstatic when they made the pick,” Bettis told the show. “I thought they didn’t understand or recognize the error of their ways. They went away from the power running game. With that pick, they realized, ‘We need to get back to running the football.’ It was a commitment that they made and they further cemented that with the center/guard in the third round and the offseason acquisitions in the offensive line.”

As Steelers’ fans well know, Pittsburgh’s run game was terrible last season. After a decent start to begin the year, they become the league’s most inefficient attack in basically every category. Their average was poor, their success rate was low, the run game failed to produce big plays, and converting on third/fourth and short was a coin flip.

Bettis says the Steelers drafting Harris is a great fit for both sides.

“Najee was the best and perfect person for that opportunity.”

Harris, like Bettis, has size and runs with power, but also has a surprising amount of quickness to his game. He has great feet to make lateral moves, like Bettis did, and the ability to win in space. The only real knock on his game is a lack of long speed. Similar to Le’Veon Bell, Harris rarely hit the home run in college.

Some analysts have criticized the Steelers for taking a running back in the first round. Bettis believes it’s worth the investment, but finding the workhorse back in the college game is tough to do these days.

“The problem is in college football, the running backs aren’t really there. They’re all switching to linebacker…until we can start seeing more 6’2″, 225-pound running backs, you’re not going to see [more of them taken in the first round].”

Harris is the first running back Pittsburgh’s drafted in the first round since Rashard Mendenhall in 2008. He’s just the third Steelers back taken in the top spot since 1989. In ’89, the team drafted Tim Worley. He played just four years with the team before Pittsburgh traded him to the Chicago Bears. Let’s hope Harris has a better career than either of those two.