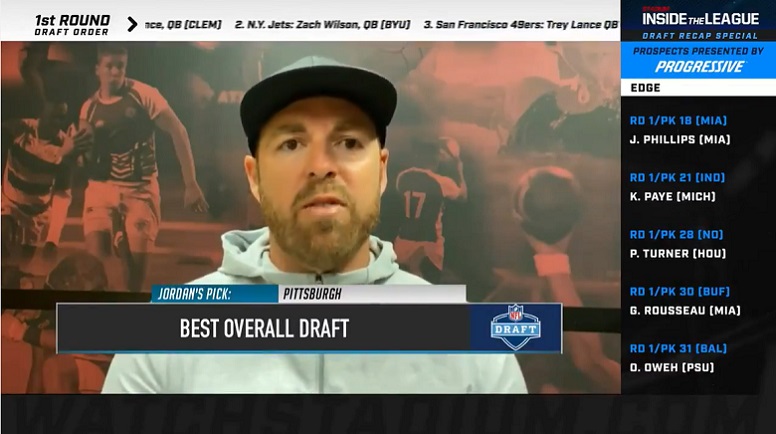 As a whole, it certainly seems like a large portion of the major media NFL analysts weren’t very fond of the 2021 draft class put together by the Pittsburgh Steelers over the weekend. In fact, you will be hard-pressed to find many major media or former NFL players that have given the Steelers more than a B grade when it comes to their 2021 draft haul. Former NFL quarterback Jordan Palmer, however, not only thinks the Steelers had a great 2021 draft, but he also went as far as to say that he thinks the team had the best draft overall last weekend.

“It pains me to say this living in Cincinnati for a long time, but I think it was the Pittsburgh Steelers,” Palmer said on Stadium’s ‘Inside the League’ draft recap show, when asked which team he thought had the best 2021 draft. “I look at evaluating a draft off two things, did they address needs, and did they win on something that may or may not be a need but that player they got at a really good value?”

The @steelers had the best overall draft, according to @JwPalms.

Do you agree? #NFLDraft pic.twitter.com/y8OUVOkQDA

Palmer, the younger brother of longtime Cincinnati Bengals quarterback Carson Palmer, went on to describe his thoughts on the Steelers’ 2021 draft class by selection. That means he started with running back Najee Harris, the team’s first round selection out of Alabama.

“And I look at Najee Harris being a premier running back,” Palmer said of the Steelers’ first round selection. “They do a great job of developing running backs. The last couple of running backs, James Connor’s had a great career based off where he’s been drafted and before that Le’Veon Bell, who was not a first round pick, turned into a great player for them. Now they get their feature back.”

Next, Palmer gave his thoughts on the Steelers’ second round selection of Penn State tight end Pat Freiermuth.

“In the second round, Pat Freiermuth, a guy who I spent a lot of time with this offseason,” Palmer said. “I think he’s got a chance to come in and be an instant impact, similar to Tyler Eifert coming out of college into Cincinnati, out of Notre Dame. I think this is a guy who can be difficult after the catch, he can handle a lot of offense, and I think he’s going to be their superstar tight end and a really durable one for a long time.”

Palmer then proceeded to round out most of the rest of the Steelers’ 2021 draft class.

“And then they went to need,” Palmer said. “They took two offensive linemen and with their next two picks, one in the third, one in the fourth. And then we know how good of a job they do at developing defensive talent and their next four picks were on the defensive side of the ball; two linebackers an edge rusher and a safety.”

While Palmer calling the Steelers’ 2021 draft class perhaps the best overall in the NFL is a little strong, I get where he is coming from overall. Look, if you measure the Steelers’ 2021 draft haul by needs filled alone, it gets an A easily. Sure, we can debate forever about if picking a running back in the first round is a wise move. That aside, at least the Steelers did draft one in the first round that was arguably the best in this year’s class, and one that can stay on the field every down as well.

Sure, most would have liked to have seen a center drafted in the first or second round, and preferably one named Creed Humphrey or Quinn Meinerz. The Steelers obviously though very highly of Kendrick Green. He seems to have been the player they had targeted in the third round way before the draft got underway.

As Palmer pointed out, the Steelers’ first four 2021 draft picks all filled big needs on the offensive side of the football. That must count for something. The next four Steelers’ selections were all defensive players. It’s a good bet that the first three make the 53-man roster out of training camp if healthy.

As for the pick that Palmer didn’t mention during his rundown, punter Pressley Harvin III, the Steelers really did need a young punter this year that could potentially challenge incumbent Jordan Berry for his job this summer. Bitching about spending a seventh round pick on a punter that might just be on your roster the next four years is silly.

While rookie draft classes really can’t be judged in totality until three years after the fact, Palmer made it clear just a few days after this year’s event took place that he likes what the Steelers did with their selections last weekend.

“So, I think this Pittsburgh Steelers, as usual, knocked it out of the park,” Palmer said. “They addressed needs and they also got some really quality players with their first two round picks.”