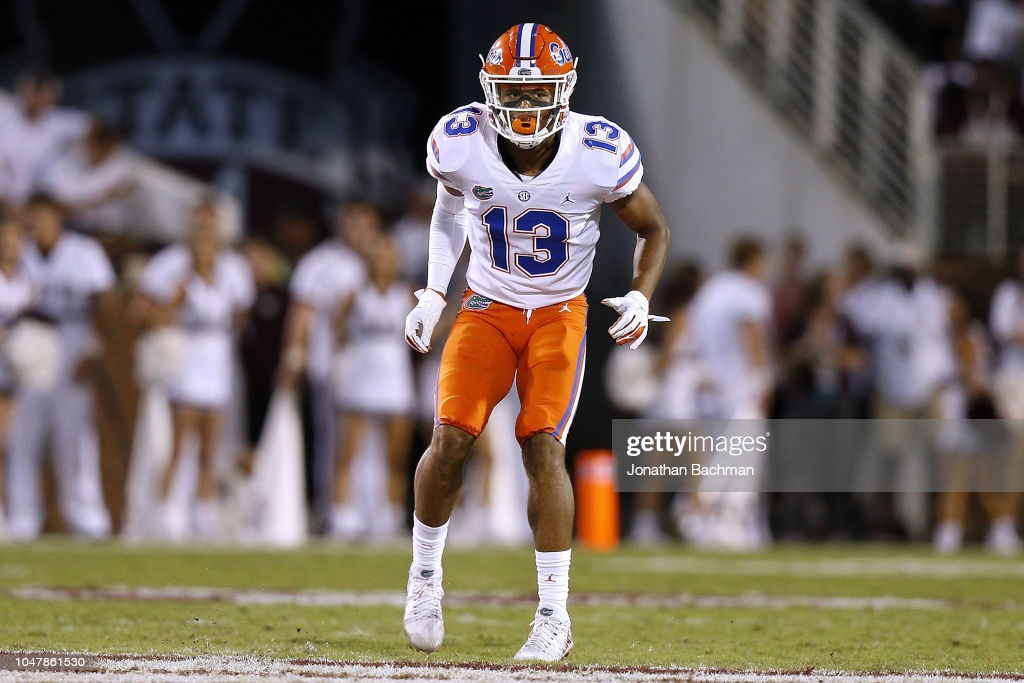 – Long, tall athlete with good weight on a pro-ready frame
– Decently explosive athlete (34.5” vert, 127” broad)
– Has experience playing center field, split zone, in the box, and occasionally in the nickel
– More effective when able to break downhill on the ball in front of him
– Does a good job displaying range in split zone where he can use his length and ball skills to impact the pass running free to the football deep downfield
– Length and leaping ability aid in his ability to challenge the catch point of the football while in the air
– Not afraid to come up and hit you as a defender, willing to go through with his tackle attempts
– Will shoot his hips through the ball carrier as a striker
– Has ample experience on kick and punt coverage units

– Average to below average deep speed (4.58 40) to run with receivers vertically down the seam
– Isn’t the quickest athlete in terms of lateral movement skills and being able to change direction quickly when working in the slot
– Needs to be a more consistent tackler and not resort to diving/arm tackle attempts
– Needs to take better angles to the football as a run defender, either overrunning the play or allowing the runner to get the angle on him
– Can be hesitant at times to commit to his pursuit, reading in the backfield for too long instead of triggering on the ball

– Senior prospect from Houston, TX
– Played in 11 games as a reserve during his true freshman season, recording nine tackles, and was a key member of Florida’s special teams
– Started 12 of 13 appearances as a sophomore, posting 49 stops including one sack, two interceptions and one additional pass breakup
– Led the team with four interceptions while making 30 tackles and one pass breakup despite starting just six of 13 games played as a junior
– Started 10 of 11 games played as a senior, recording 62 tackles and two for loss
– SEC Academic Honor Roll in 2018, 2019, and 2020; East-West Shrine Bowl Invitee

I had the opportunity to work closely with Donovan Stiner at the University of Florida in the Strength and Conditioning Department back in the summer of 2018. He came of as an even-keel, quiet personality that didn’t say a whole lot, but was very receptive to coaching and worked hard in the weight room and on the practice field. He came off as a well-built individual for a defensive back, having good strength in all of his lifts while also competing in sprint groups by showing effort and hustle on every rep.

When popping in the game tape and evaluating the player from a scouting perspective, you see those same things. Stiner has a long, linear frame with acceptable muscle mass for his size, and has the length necessary to impact passing lanes when in coverage. He is well-coached in Todd Grantham’s defense, playing with a lot of effort, and can be a menace when coming downhill. He plays with nasty intentions when allowed to earhole runners coming from the deep middle, looking to smack them with a big hit. We see an example of that here against Mississippi State, where Stiner triggers downhill on the blitz from the deep middle, shooting the gap and striking the passer for the violent hit.

He does a great job shooting his hips through contact and playing through the ball carrier as a tackler. Here is a good rep against the Tigers where Stiner reads the WR screen, comes downhill quickly, and fires through the receiver on contact and plants him into the ground.

Stiner has played all over the defensive backfield during his time in Gainesville, lining up as a split zone safety, a deep center fielder, in the box, and occasionally split out in the nickel. He does his best work when he is able to roam over the middle of the field and use his length and range in coverage to make plays on the ball when in the air. Here against Vanderbilt we see Stiner drop into the middle of the field from the deep safety spot and undercut the route over the middle, picking off the pass and getting a good return on the takeaway.

He does his best work when playing deep and being able to break on the ball in front of him, having the explosiveness and length necessary to impact the pass. Here against LSU, we see Stiner’s range on full display as he has the deep left-third of the field, but recognizes the pass to the sideline and shows his ability to flow to the football and play the ball in the air like a WR, attacking it at its high point and coming down with the big INT.

He is best suited for split zone duties where he has his deep half of the field and can flow to the sideline or come down to impact passing lanes over the middle of the field. Here against the Commodores, we see Stiner cover his deep half and then break on the ball on the sideline on the Cover 2 look, undercutting the route by stepping in front of the receiver for the interception.

Now the big knocks on Stiner’s game are his long speed and his pursuit angles as a run defender. He has the size and length to play receivers downfield, but he lacks elite deep speed to stay in stride with speedsters if tasked to cover in man coverage. His angles to the football against the run or on short passes need to be improved, as he will completely run himself out of the play at times, either being too timid and waiting for the runner to come to him or pursuing where the runner is and not going to here he is going to be. Here are a couple of examples in the LSU game where Stiner takes bad angles to the football, giving up a ton of YAC in the process.

Along with bad pursuit angles, Stiner tends to leave his feet as a tackler, meaning that bigger, more powerful runners can break through his tackle attempts if he is unable to go through them and run his feet on contact. For the most part, Stiner is an aggressive striker, but he can be the nail rather than the hammer more often than you’d like to see. Here are a couple of examples where Stiner goes low but leaves his feet, and either gets dragged by the runner or simply misses as the runner goes right through him.

Overall, Stiner has the size, length, and playing experience teams would love to have in a split zone safety that has shown some versatility playing in multiple spots in the defensive backfield. However, his lack of top-end speed limits his upside as a rangy cover man, and he can be difficult to trust as the last line of defense due to tackling inconsistencies and poor angles to the ball. Should he clean these issues up in terms of tackling, Stiner could figure to play a key role as a depth piece at safety and contribute heavily on special teams.

His size, athletic ability, and play style remind me of Chris Conte, who played with the Bears and Buccaneers, himself a long, rangy safety that was a good depth piece and capable spot starter for the better part of a decade. I can see the same thing for Stiner, who needs to show he can be a special teams ace and provide capable play as a backup safety to make the roster. Given the lack of depth on the back end of Pittsburgh’s roster, I would give him a chance to make the roster as the backup free safety who could maybe contribute at strong as well, should he provide more consistent play.