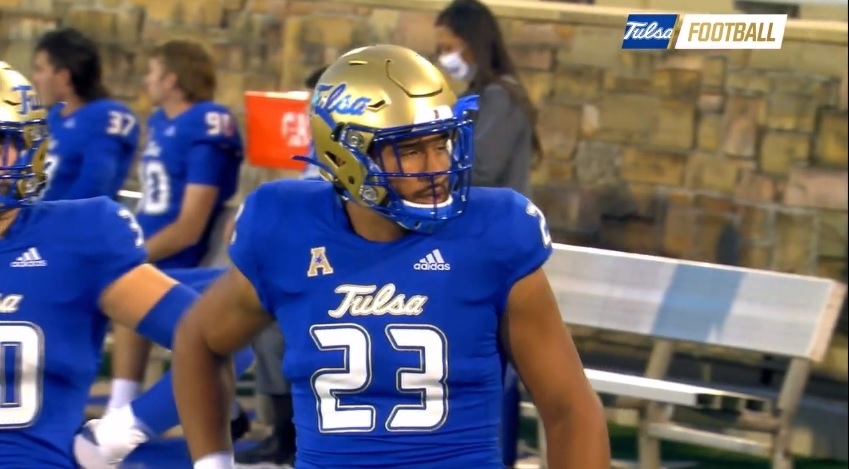 Doubting Tulsa LB Zaven Collins? That mistake’s been made before. Collins has gone from unknown recruit to one of the most intriguing athletes in the entire 2021 NFL Draft Class.

In high school, most of the football world didn’t know Collins’ name. But he was a star of Hominy, Oklahoma. As a senior, playing quarterback and defense, he racked up nearly 50 total touchdowns with 91 tackles on the other side of the football. He led Hominy High to its fourth state title his senior season, blowing out Wynnewood. By halftime, Hominy led 35-7 and went on to win 42-14. Playing in cold temps, Collins had four total touchdowns; three rushing, one passing.

But all of that success didn’t cause college scouts to come rushing in. Collins was barely on anyone’s radar, a two-star prospect. The price of playing in a small, Midwest town.

“They told me that I had all the tangibles,” Collins said before his Pro Day Friday. “I had all the tangibles, all my grades. I was valedictorian. I had a great ACT score. All my grades were right. I had no off-field issues. Everything was perfect. I played well enough. They just said that my school was too small. My level of competition was not high enough to translate over to the D-1 level and they didn’t want to take a chance on a guy like me. I kind of told some of those people to piss off.”

Ultimately, he had just two offers. One to Central Oklahoma, the other to Tulsa. Tulsa was the no-brainer choice. Making the permanent move to linebacker, he added weight during his redshirt freshman season. The next year, he was a full-time starter, exploding for 85 tackles, 9.5 for a loss, with three pass breakups, 1.5 sacks, and a blocked kick. He was named for several All-American teams. Collins posted similar numbers before having his best season in the shortened 2020 campaign. In just eight games, he had 54 tackles (7.5 for a loss) with four sacks and an eye-popping four interceptions. He saved his best for last, a 96 yard pick six to beat Tulane in overtime.

When it came to the college football award circuit, Collins cleaned up. He won the Bronko Nagurski, Chuck Bednarik, and Lombardi Awards while coming in second place for the Butkus Award, narrowly losing out to Notre Dame’s Jeremiah Owusu-Koramoah.

At the NFL level, he has the chance to become the rare linebacker with size and speed. Tulsa moved him all over the defense, that’s what teams do with their best player, and Collins knows he’s comfortable playing anywhere along the defensive front. But he prefers to be in a system that will allow him to run and chase.

In some ways, he compares to Lawrence Timmons, who wound up being Mike Tomlin’s first ever draft pick in 2007. But Collins is much taller and heavier while having similar athleticism and skillset.

Collins is looking to become just the third Tulsa player drafted in the first round in school history and the first since the 70s. Most mock drafts have him falling somewhere in the first round. Pittsburgh is a logical fit though based on who they sent to his Pro Day yesterday, not to mention their shyness of drafting non-Power 5 players early, the odds of Collins being their guy is low.

And maybe that’s a mistake. Collins is the guy whose been told he hasn’t played against good enough players his whole career. And he’s proved them wrong every time. But the chip on his shoulder doesn’t just come from that I’ll show them way of thinking. His goal in the NFL is to support the people who’ve been in his corner Day One.