Are the Pittsburgh Steelers destined to select a running back in the first round of the 2021 NFL Draft? It certainly appears as though they are headed in such a direction. If they ultimately do, it’s a good bet that running back will be Najee Harris out of Alabama. Should Harris wind up being the Steelers’ first round selection, it will be quite notable on several fronts, one of them being the running back’s age.

On draft day, Harris will be 8,452 days old. When it comes to first selections made by the Steelers since 2000, the first year in Pittsburgh for general manager Kevin Colbert, that’s quite ancient. In fact, Harris would become the Steelers’ third-oldest first round selection under Colbert if selected by the team. The two former Steeler first-round draft picks older than Harris when originally selected are nose tackle Casey Hampton (8,631 days) and outside linebacker Jarvis Jones (8,595).

So, how does Harris’ age stack up to other running backs drafted in the first round dating back to 2000? If indeed a first round selection this year, Harris would become the fifth-oldest running back ever drafted since 2000, behind only Larry Johnson (8,559 days), Ronnie Brown (8,533), Doug Martin (8,504) and Sony Michel (8,469). Harris, however, enters the NFL with 718 total touches at the college level, more than Johnson, Brown, Martin, and Michel each registered in college before teams drafted them.

If selected at 26 overall or higher in the first round of the 2021 NFL Draft, Harris would become the second-oldest running back ever selected in the first 26 overall selections of an NFL Draft since 2000. He would be behind only Brown, who was selected second overall by the Miami Dolphins in the 2005 NFL Draft.

Harris exits college as an extremely talented running back, and not many will dispute that. The Steelers certainly seem to have had quite a bit of interest in Harris as well throughout the pre-draft process. That won’t soon be disputed, either. While Harris could certainly go on to have a very successful career in the NFL despite entering the league over the age of 23, one really must wonder if the Steelers will ultimately be the team he lands with.

If Harris does wind up being the Steelers’ first round selection this year, there’s sure to be quite a bit of talk about his age, the overall amount of usage in college ahead of his rookie season getting underway, and the fungibility of the running back position at the NFL level.

By the way, Harris will be just over halfway to 24 years of age come his first NFL game in September, so keep that in mind. We now have a little less than two weeks to go until we find out if Harris’ age makes a difference to the Steelers, if he’s still on the board come time the team picks in the first round. Do you think it will? 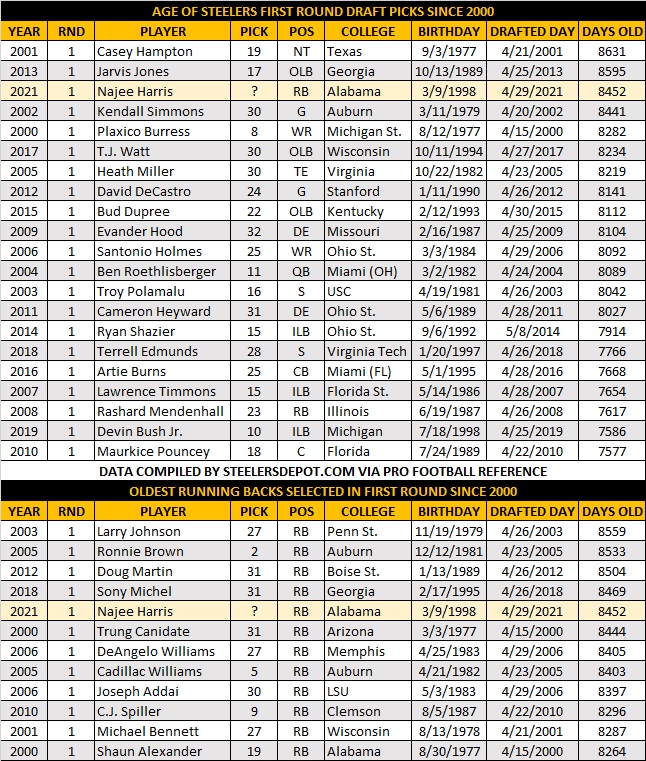