The Pittsburgh Steelers have made several more signings the last few weeks and with it now being the month of April, it’s a perfect time to update where the team sits from a salary cap perspective.

Let’s start first with what the NFLPA shows on Friday night for the Steelers. They now have the Steelers with 67 players under contract for the 2021 season and the team $12,511,086 under the cap. Those numbers, however, still do not include the new contracts of defensive tackle Tyson Alualu, linebacker Jarvis Miller and receiver Mathew Sexton, so that is especially important to note when looking at that number. That NFLPA number also does not include the 2021 offseason workout placeholder amount of $792,000, which will also be hitting soon the cap. The Steelers now have 70 players under contract as of Friday night as well.

While the contracts of Alualu, Miller and Sexton have not hit the NFLPA update yet, sources have passed them along to us already. The Miller and Sexton deals were one-year contracts for the minimum and thus will not impact the Steelers salary cap as they are both outside the rule of 51. The Alualu numbers were reported a few says ago.

Below is the latest breakdown of the Steelers current and future cap situation. The breakdown includes approximated predictable future costs the team will have prior to the start of the 2021 regular season. The breakdown should be self-explanatory.

As the chart shows below, the Steelers $10,461,586 in cap space that they currently have as of Friday night is already all spoken for and then some. The Steelers will likely restructure the contracts of defensive end Stephon Tuitt and kicker Chris Boswell at some point between now and the start of the 2021 regular season. The team is also expected to sign outside linebacker T.J. Watt to an extension at some point during the summer and such a transaction could potentially free up a little bit more of 2021 salary cap space depending on the structure and new money amounts of the deal. 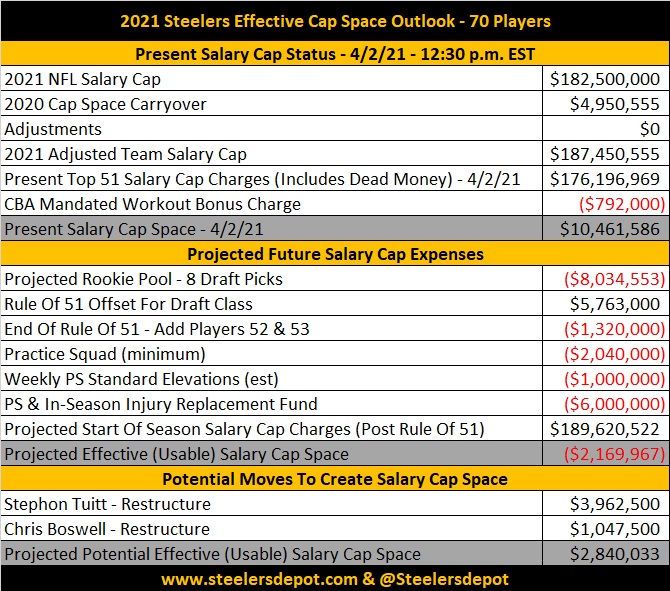