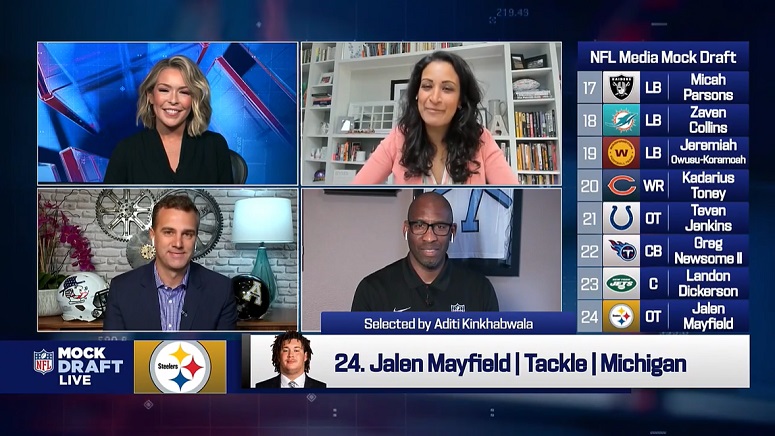 As expected, a lot of final mock drafts are coming in with the start of the 2021 NFL Draft in Cleveland, OH now less than a week away. The NFL Media live mock draft has now been finished as well and it included Aditi Kinkhabwala picking for the Pittsburgh Steelers at 24th overall in the first round. She chose Michigan tackle Jalen Mayfield for the Steelers.

“I can’t promise that that this is what Mike Tomlin and Kevin Colbert are going to do, but if I had the power, the Pittsburgh Steelers absolutely 100% would take an offensive lineman,” Kinkhabwala said of her mock draft pick for the Steelers. “And the best available offensive linemen right now on the board is Michigan offensive tackle Jaylen Mayfield. And let me tell you, an offensive lineman is necessary to protect Ben Roethlisberger. To give Ben Roethlisberger time to get the ball downfield to his wide receivers and to create holes for any running back.”

Kinkhabwala knows that most analysts and fans of the Steelers were likely expecting her to select a running back at 24 overall so she addressed that as well.

“I hear all those Steelers fans saying, ‘no, no, no, the Steelers need to take a running back.’ Barry Sanders is not in this draft,” Kinkhabwala said. “So, somebody needs to create holes for a running back and right now the Steelers only have one offensive lineman with any sort of resume to him.”

NFL Network draft analyst Daniel Jeremiah then weighed in on the mocking of Mayfield to the Steelers.

“The only thing I maybe would say is, and you couldn’t do it in this mock draft, but you could trade back a little bit and maybe still get Mayfield,” Jeremiah said. “I like Mayfield as a player. Didn’t have a great pro day but to me, I think he is an upgrade for the Pittsburgh Steelers and could play guard or tackle for Pittsburgh. They’ve got to get better up front, and they lost a lot of pieces.”

“Mayfield gives them some toughness upfront,” Brooks said. “The Pittsburgh Steelers have to go back to being a physical team after kind of skewing towards finesse. If they add an offensive lineman and some more pieces up front, it enables them to get back to playing Steelers football, which is run it, play great defense and then let Big Ben do his thing from the pocket.”

It’s not so awful that Kinkhabwala mocked an offensive lineman to the Steelers at 24 overall in the first round. The awful part of her selection is that it was Mayfield, who really isn’t viewed by most draftniks to be a first-round talent. He also only played right tackle at Michigan during his college career and there’s a good chance he might have to kick inside to guard at the NFL level as well.