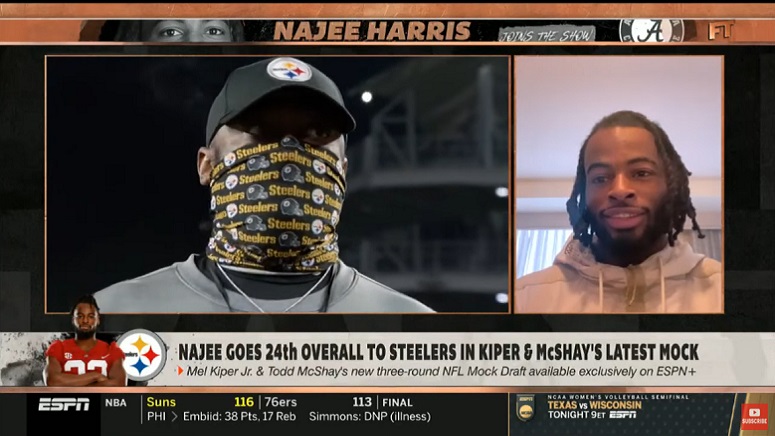 For the most part, there is something of a consensus that has formed over the course of the draft season on which prospects make up the top tier of the running backs in this year’s class, and it comes down to three names: Najee Harris, Travis Etienne, and Javonte Williams. The order will vary depending on the evaluator, but the majority have them in the top three, with a drop-off following.

Many believe that one of them will wind up coming to the Pittsburgh Steelers, who are one of the chief teams in the market for a new featured back, with James Conner leaving in free agency. And according to NFL Network Analytics Expert Cynthia Freuland, not only is Harris the best fit for Steelers, they are the best fit for him. She writes:

Harris is a triple threat: rushing, pass catching and blocking. Pro Football Focus calculates that he led the FBS last season in total forced missed tackles (93 total, as a rusher and receiver). His 71 forced missed tackles on rushes and 821 rushing yards after contact both ranked No. 2. He also had just three drops on 83 catchable passes over his last three seasons at Alabama. His total of 2,080 yards after contact ranks as the fifth-most since 2018. His blocking and route-concept growth project to fit best under the tutelage of Mike Tomlin and Co. My models show some similarities between Harris and former Steelers star Le’Veon Bell. They both have a higher center of gravity than the average back and they share an accelerating running style (both get faster as they run at similar rates). In Pittsburgh’s offense — and with Ben Roethlisberger’s recent style of play — Harris’s potential production is supercharged.

This is not the first time that we have had evaluators draw comparisons between Harris and Le’Veon Bell, whom the Steelers drafted in the second round in 2013 out of Michigan State. He would go on to become a first-team All-Pro, and at one point many thought that he would help revolutionize the position.

As it turns out, that wouldn’t really happen. His skill set when he was in his prime is simply hard to come by. But he did serve the purpose of helping to raise the profile of the position again, even if his own career has taken some turns since 2017.

What he was in Pittsburgh, at least on the field, was a true workhorse back, often leading the league at his position in percentage of snaps played, near the top in touches per game and yards from scrimmage. If Mike Tomlin gets his hands on a back like Harris, I think it’s safe to assume that he would be used in a fairly similar manner.