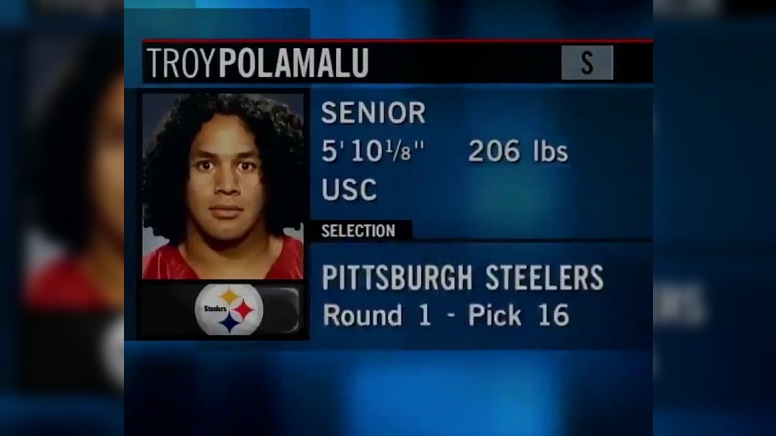 What were you doing 18 years ago today? If you were watching the 2003 NFL Draft on this day 18 years ago, you saw the Pittsburgh Steelers select safety Troy Polamalu out of USC in the first round at 16th overall .

The Steelers traded up 11 spots in the first round with the Kansas City Chiefs from No. 27 to No. 16 to get Polamalu. The Chiefs ended up selecting running back Larry Johnson out of Penn State at 27th overall. In addition to exchanging first-round picks in the 2003 NFL Draft, the Steelers traded their third round pick (92nd overall) and a sixth round pick (200th overall) to the Chiefs to move up.

“Obviously, we just completed a trade to move up in the first round to get a player that we really, really were excited about,” Steelers general manager Kevin Colbert said of the trade up to draft Polamalu. “This kid is going to bring a lot of energy to a need position. He’s special. He’s going to help us. How soon? Who knows. We’ll see how everything develops. But this kid, he’s a special player.

“Really, our bottom line on him, this kid, he plays safety like Junior Seau plays linebacker. He’s going to create a lot of excitement and he’s going to help our defense immediately.”

“The only other thing I’ll say, I know a lot of people have talked about this guy as a box safety that he’s only good in a box,” Cowher said of Polamalu. “This guy is a tremendous athlete. He ran 4.3-something in his workouts. His change of direction is unbelievable. He wasn’t asked to cover, but I don’t think there’s going to be any problems he’ll have in coverage. This is a very good athlete.

“So, he was a guy, if you look at it, one of the few guys in this draft that had that unique ability to be able to hit like a linebacker and be able to cover like a corner.”

The trade up was certainly worth it. Polamalu went on to have a Hall of Fame career, and helped lead the Steelers to two Super Bowl championships.

At the time, Chiefs general manager Carl Peterson really wanted to draft Johnson out of Penn State. He knew Cowher from when he was the defensive coordinator in Kansas City. The trade ended up working out for both sides. Below is how the trade came about, per published reports.

“Both teams got what they wanted at the time,” Peterson wrote in an email to Jeremy Fowler of ESPN. “The Steelers needed and wanted a FS/SS, and the Chiefs wanted a big RB. Both players gave excellent production the first 4-5 years of their careers, but Troy P. went on to a very long, and a HOF career, and Larry J. did not play near as long in his NFL career. That’s OK, because some years earlier Bill C. assisted me in moving up in the first round, to draft a pretty good TE from Cal Berkeley (Tony Gonzalez), who should be a first-ballot HOFer this next year!”

Polamalu was an eight-time Pro Bowler during his NFL career with the Steelers and was named first-team All-Pro four times, along with being named Defensive Player of the Year in 2010. He appears on the NFL 2000s All-Decade Team and the Steelers’ All-Time Team. In his 12 seasons with the Steelers, Polamalu started 142 of 158 games and recorded 783 total tackles, 583 of those being solos, 32 interceptions, three returned for touchdowns, 107 passes defended, 12 sacks, 56 tackles for losses, 12 quarterback hits, 14 forced fumbles and seven fumble recoveries, two returned for touchdowns.

Polamalu was big in the postseason for the Steelers as well. He had three career interceptions in the playoffs. None was bigger than his pick-six off Baltimore Ravens quarterback Joe Flacco in the 2008 AFC Championship Game to send the Steelers to Super Bowl XLIII, which they ultimately won.

Polamalu was voted into the Pro Football Hall of Fame as a member of the Class of 2020. His induction into Canton is this August. The COVID-19 pandemic caused a postponement of last year’s ceremony.

On this day 18 years ago, the Steelers drafted Troy Polamalu #Steelers @tpolamalu pic.twitter.com/NEUYXqGitT