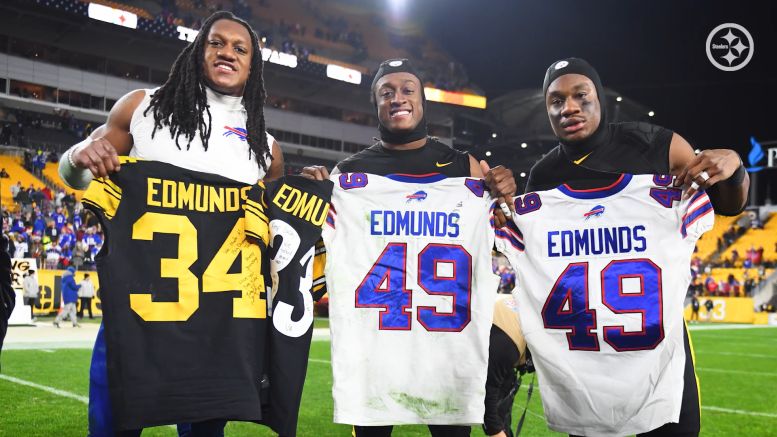 The Pittsburgh Steelers are not unfamiliar with the family dynamic that can be tied to sports. After all, the organization has been controlled by the Rooney families for nearly 90 years now since its inception. The front office and scouting department has multiple generations in there.

Even the roster has multiple sets of brothers, including the Edmundses, with Terrell being drafted in the first round in 2018 at safety. Trey, a running back, came into the league a year earlier with the New Orleans Saints, but found his way to Pittsburgh a year later.

It was youngest sibling Tremaine, however, who has been the subject of the highest prestige. He went first in the same draft class as Terrell in the first round to the Buffalo Bills, and he already has a Pro Bowl under his belt. But he’s still the odd man out when they get together.

“I feel just a little left out, because listening to them, things that they do at the house, it just reminds me of old days, being right with each other, and just being there talking about ball”, he said of the siblings’ offseason time together, with Trey and Terrell on the Steelers, during an appearance on Good Morning Football on the NFL Network. “Sundays are a little tough. When I look at their games, I almost think I’m playing, just because I want to see them succeed”.

“That just comes with being brothers and being with each other the whole time, and just balling together”, he added. “We all know what it takes, and we all train together. We all put that work in together, so when I’m watching them play, it’s like, man, you better ball out”.

It also, of course, comes from their parents, both of whom were accomplished athletes. Father Ferrell Edmunds was a Pro Bowl tight end in the NFL, and the family remains incredibly close and reinforces the principles through which they have achieved the success that they have found at the highest stage of their profession.

“We hold each other to a high standard. We just want to see each other go out there and do the best that we could do”, Tremaine said. “Anything less, we’re gonna let each other know. That’s just how we were raised. That’s how we were brought up. That’s the connection we’ve got with each other. We know we can keep it 100 no matter if feelings get hurt or not. If you can’t hear it from your brother, then it’s gonna be tough hearing it from somebody else”.

While Trey has spent the past three years bouncing back and forth between the 53-man roster and the practice squad, Terrell has established himself as the starting strong safety, and has grown each year, coming off of his best season in 2020.