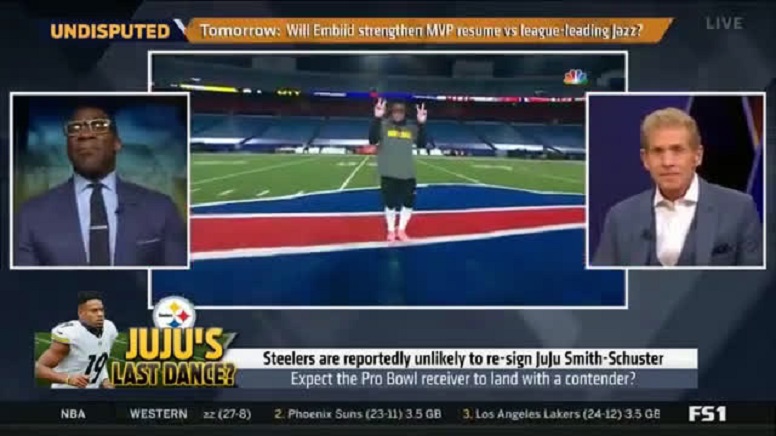 The Pittsburgh Steelers certainly appear set to move on from wide receiver JuJu Smith-Schuster in less from the week as the soon-to-be unrestricted free agent still remains unsigned. If that’s what happens, former NFL tight end Shannon Sharpe will not be surprised one bit by the Steelers decision to let Smith-Schuster walk

“Looks like Corvette-Corvette is going to be moving on, Skip,” Sharpe told his UNDISPUTEED co-host Skip Bayless this past week. “I’m not surprised by this and anybody that knows football that played the game of football, know JuJu was nothing but a glorified [number] two.”

Sharpe went to say that the only reason Smith-Schuster compiled the kind of numbers he did in his first two seasons is because he played opposite former Steelers wide receiver Antonio Brown.

“He got those numbers because of AB. All the attention went to AB and now when he got the coverage rolled to him, he got the number one receiver, you saw.”

Sharpe now expects the Steelers to let Smith-Schuster ride off after his rookie contract much in the same way they have let other top wide receivers they’ve had over the years leave.

“But Skip, this was the Steelers MO. Santonio Holmes, Plaxico Burress, Emmanuel Sanders, Mike Wallace, they moved on. Only Hines Ward And AB got contracts after their rookie ones,” Sharpe told Bayless. I’m not surprised by this.”

We’ll now wait and see what ultimately happens with Smith-Schuster as the start of the new league year and free agency is 4:00 p.m. EST on Wednesday. The legal free agency tampering period begins Monday evening, so we’ll see if any news about Smith-Schuster surfaces before then.

Assuming he does hit unrestricted free agency Wednesday night, Smith-Schuster figures to have plenty of suitors. Assuming that’s the case, will he get a long-term deal that pays him $16 million or more or season, or will he need to settle for a much shorter deal at a lower annual price due to fallout from the pandemic, which included the NFL’s salary cap number decreasing by more than $15 million from 2020. Stay tuned as I bet Sharpe and Bayless both are.