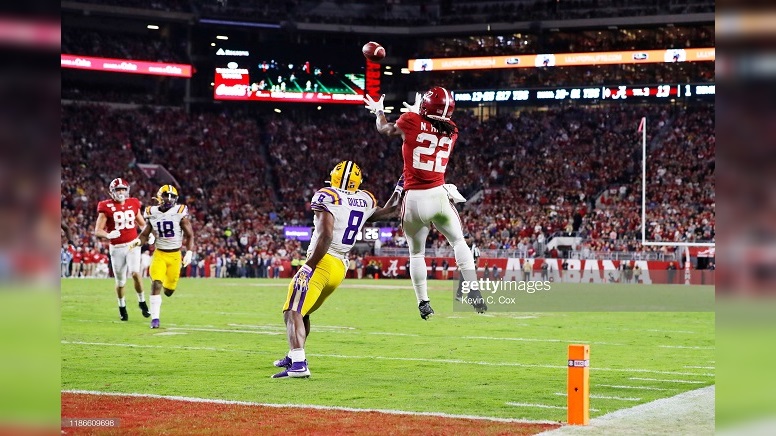 Will Alabama running back Najee Harris ultimately be selected somewhere in the first-round of the 2021 NFL Draft? That seems to be the ongoing speculation at this point with it now being March. While Harris is a highly regarded runner as he exits college for the NFL, the receiving skills he showed at Alabama can’t be overlooked as well.

On Wednesday, Senior Bowl executive director Jim Nagy made it a point to tweet about Harris’s receiving skills and what the running back brings to the passing game. Nagy feels that Harris “would immediately bring an identity” to two teams in particular, the Miami Dolphins, and the Pittsburgh Steelers.

Alabama RB Najee Harris is carrying higher grades league-wide than Derrick Henry did coming out and Henry has deservedly been in MVP convos. Big difference is what @ohthatsNajee22 brings in pass game. Harris would immediately bring an identity to Dolphins (#18) or Steelers (#24). pic.twitter.com/u6k1cE9UWC

During his college career at Alabama, Harris, who took part in this year’s Senior Bowl week, caught a total of 80 passes for 781 yards and 11 touchdowns. 43 of those receptions for 425 yards and four touchdowns came this past season. He made those 80 total receptions on 100 total targets and had just three drops on his way to registering a 9.8 yards per catch stat. By the way, 16 of those 80 catches resulted in gains of 15 or more yards.

Almost forgot about this gem from Najee Harris 👀

Harris has been mocked to the Steelers at 24 overall quite a bit this offseason and that’s likely to continue until the 2021 NFL Draft finally gets underway. The Steelers not surprisingly showed some level of interest in Harris during the week of the Senior Bowl as well.

The last time the Steelers selected a running back in the first round of a draft was in 2008 when they picked Rashard Mendenhall out of Illinois 23rd overall. Mendenhall played five seasons for the Steelers and registered 4,210 total yards from scrimmage and 31 total touchdowns in the 57 total regular season games that he played in.