With franchise tags being applied around the NFL at a steady pace on Tuesday, one would think we are very close to the league’s official announcement as to what the salary cap number for the 2021 season will be. With that said, at the time of this post there still has been no official announcement. There is, however, a new report Tuesday evening concerning speculation as to what the highest amount the 2021 salary cap number could be.

According to Mike Florio of Pro Football Talk Tuesday evening, the most the 2021 NFL salary cap number will likely be is $183 million. In short, the expectations are now that number will be somewhere between the new collectively bargained floor amount of $180 million and $183 million.

So, what does this latest report mean for the Pittsburgh Steelers? I’m glad you asked.

With the Steelers signing two of their exclusive rights free agents this week in center J.C. Hassenauer and inside linebacker Marcus Allen, the team now has 55 players officially under contract for 2021. The rule of 51 number for the team is currently $172,578,010 and there is $9,565,459 in dead money on the books for 2021 as well, per the NFLPA. The Steelers are also rolling over $4,950,555 in unused 2020 salary cap space. 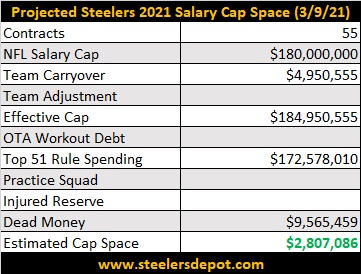 The Steelers still have one unsigned exclusive rights free agent in inside linebacker Robert Spillane and his one-year tender could be signed, sealed, and delivered in the coming days. Spillane signing should only use another $190,000 in salary cap space once top 51 roster displacement takes place.

Below is an email sent out Tuesday by the NFLPA to player reps and agents that explains some salary cap things. it is worth reading.

Email sent today to the player reps and agents: pic.twitter.com/hdSl1dbJZn