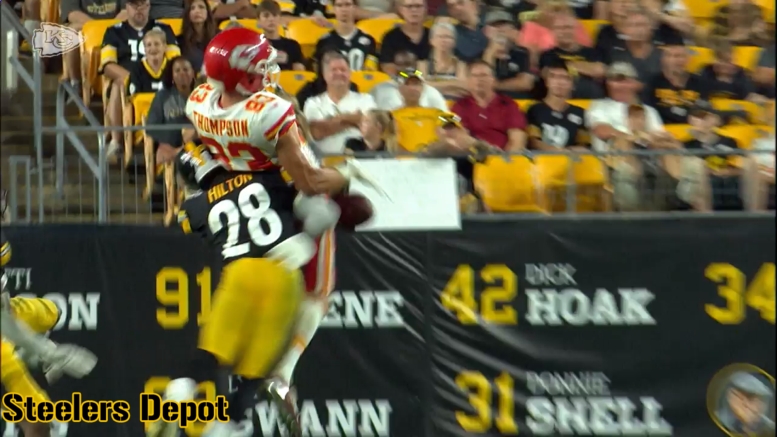 It may be that we find out soon that we have been experiencing the final days of Mike Hilton as a member of the Pittsburgh Steelers, and if that is the case, then the team will certainly be worse off for it. One of the most versatile defensive backs in the NFL, Hilton has been playing at a bargain for the past four seasons, but is now due to be an unrestricted free agent, a long-awaited status for the former undrafted free agent.

I would argue that one of the keys to his success has simply been knowing who is he and what he is capable of. At 5’9” and sub-190 pounds, Hilton has never held any illusions about being anything other than a nickel defender, and it’s a role that he has embraced.

“It’s something I take pride in. Over these last couple years, that nickel position has really become a prime position”, he said recently during an interview on SiriusXM. “Teams started realizing if you have a guy that can play that slot position, you could do a lot defensively. Me just being a physical guy, I knew it was the perfect position for me, and it definitely plays to my strengths”.

While he may lack in size, he certainly makes up for it in physicality, as evidenced by his 30 tackles for loss over the course of the past four seasons, not to mention nine and a half sacks. Of course, he also has seven interceptions during that time on top of it.

When you hit the open market, though, you always open yourself up to what other teams might envision for you. While he told his hosts that he would be open to doing whatever a team would ask him to do, such as playing outside, he added, “I honestly know that I’m possibly better on the inside than I am on the outside”.

“I know, just off personal want, I would prefer being inside”, he added. “It matches my strengths, my ability to tackle and blitz and cover the smaller, quicker receivers. Those are my strengths. That would definitely play into my decision-making”.

It’s worth noting that when Hilton missed four games during the 2020 season, the Steelers made some significant adjustments to accommodate for his absence, even using a five-linebacker sub-package in an effort to try to replicate the physicality that they had lost.

Yet the truth is that there still aren’t that many players like Hilton out there, which is one of the reasons that many believe he will hit at or near the top of the slot defender market by this time next week. At that price, it will almost surely be outside of Pittsburgh, but never say never.