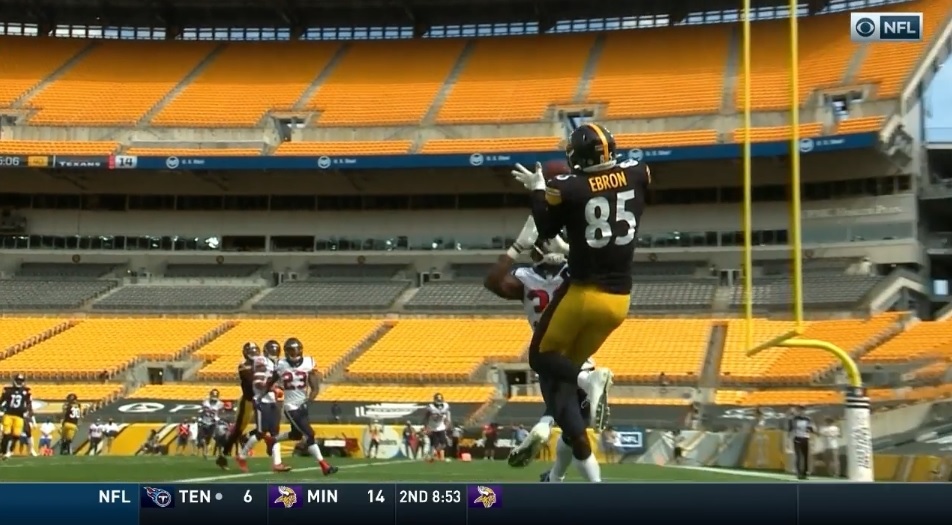 Eric Ebron has been busy this offseason training with Rischad Whitfield, the man they call “The Footwork King.” And Whitfield has some friendly advice to new offensive coordinator Matt Canada. Split #85 out more in 2021.

He tweeted out that plea along with a clip of Ebron training to prepare for the upcoming season.

Please split @Ebron85 out Wide and line him up at Slot more this Season, please 🙌🏾. He will win at the line of scrimmage every time. I know y’all saw what he did against the CB from the Texans this Szn. 1 v 1 on out there, TD Ebron! pic.twitter.com/IroSsxBbh2

“He’ll win at the line of scrimmage every time. I know y’all saw what he did against the CB from the Texans this Szn. 1 v 1 on out there, TD Ebron!”

He’s of course referencing Ebron’s touchdown against the Houston Texans back in Week 3. On third and goal near the end of the first half, Ebron was split out 1v1 and made a combat catch in the end zone. It helped sparked a comeback victory over the Texans.

According to offensive charting conducted by our Tom Mead, of the 576 pass snaps Ebron was on the field for in 2020, he was split out wide on just 42 of them. That’s just 7.3%. Of those 42 snaps, Ebron was targeted only eight times, catching four of them for 28 yards and that touchdown shown above.

To be fair, if you include all his stand-up snaps in the slot, the number is much higher at over 40% of the time. But these comments are about putting Ebron on an island against DBs and winning those 50/50 balls, something he’s capable of doing.

It’s unclear how Canada will utilize his tight ends differently than what Randy Fichtner or even Todd Haley did. Canada and the Steelers do figure to add at least another tight end either in free agency or the draft. A reunion with Jesse James makes plenty of sense. And there will be options for Pittsburgh in the draft, probably using another Day Three selection on the position. The one thing we do know is that Ebron will be the Steelers’ starter. And we’ll see if Canada splits him out more often this season.