There seems to be quite a few people already worried about the Pittsburgh Steelers and specifically, the available salary cap space they will have after March 17, the start of the new league year arrives. A lot of those concerns seem to be related to the team’s ability to afford their 2021 draft class. While I was going to wait until March 17 to address this annual topic, I figured I would knock it out on this Monday and then update the numbers after the official 2021 cap number is set.

First, let’s look at the early estimated rookie pool costs for the Steelers 2021 draft class as provided by Over the Cap. Those estimations include the Steelers projected compensatory draft picks they will receive this year. The projected cap charges for the Steelers 2021 draft picks are also projected based off an estimated NFL cap number. In short, don’t get caught up with the specific amounts across the board just yet as they will likely change. They should, however, be close and worthy enough to work with for the overall message attempting to be conveyed in this post.

As you can see in the chart below, Over the Cap has a projected rookie pool amount for the Steelers rookie draft class as being $7,705,266 and the final number should come in fairly close to that. That total amount, whatever it winds up being, will not be the amount the Steelers will need to be able to fit under their salary cap and that’s due to the top 51 roster displacement process, which so many people seem to forget about annually.

To best explain the rookie pool top 51 displacement process for estimation purposes, let’s start with the fact that all nine of the listed cap charges are above the 2021 NFL minimum salary amount of $660,000. So, if things played out just like the Steelers current top 51 sits on March 8, all nine of those amounts of the draft picks would displace the bottom nine in the current 51. Those bottom nine cap charges currently in the Steelers top 51 are all minimum based salaries and they total out at $5.94 million.

So, once the nine draft picks displace the bottom nine lowest cap charges in the team’s current top 51, the difference would $1,765,266 and that’s the extra amount the Steelers would need to accommodate in their total salary cap.

It’s also important to remember that once players are drafted that they are each listed as minimum salaried players for the team that drafted them until signed. Once the player is signed, then the displacement process for that player takes place in the top of 51.

After the league announces what the final cap number for the 2021 season will be and what the full list of compensatory draft picks are for this year, I’m sure Over the Cap will update their figures. When that process happens, I will update everyone as to what the Steelers exact rookie pool number should be and what the real-time effective cap space needed is. That number should still wind up being in the neighborhood of $1.77-$1.90 million. 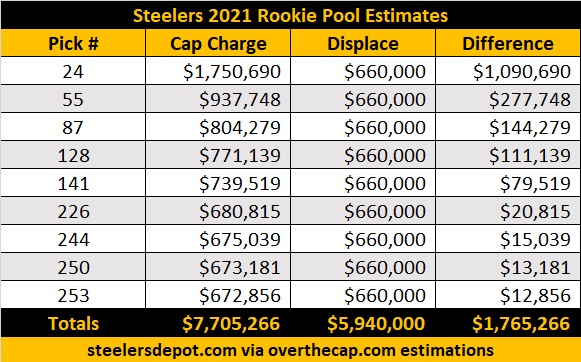