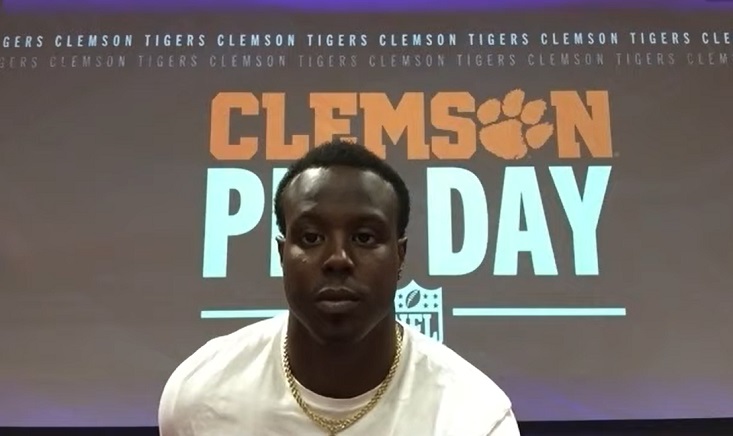 Clemson held their 2021 pro day on Thursday and the Pittsburgh Steelers had some big names in attendance to observe it in general manager Kevin Colbert, head coach Mike Tomlin and offensive coordinator Matt Canada. One of the main attractions on Thursday was Clemson running back Travis Etienne and he certainly received a lot of attention from the Steelers known trio that was in attendance.

During his post pro day Zoom session, Etienne was asked about receiving visible attention from the Steelers earlier on Thursday and specifically, how he thinks his overall versatility as a running back would allow him to fit into an offense run by Canada.

Interesting enough, Canada already knew quite a bit about Etienne before the Clemson pro day. In fact, when Canada was at LSU, he attempted to recruit Etienne out of high school. Etienne obviously chose Clemson over LSU.

Etienne made a good choice as he was able to show that versatility of his for four seasons at Clemson on his way to registering 4,952 rushing yards and 70 touchdowns on 686 total carries. His versatility was shown as well as he caught 102 passes for 1,155 yards and eight touchdowns during his college career.

It’s almost a definite that the Steelers will draft a running back early this year and it sure seems like they’re bound to land one of the top three in this year’s class in Etienne, Najee Harris of Alabama, or Javonte Williams of North Carolina. Could Etienne wind up being that running back? We’ll certainly see but it is obvious they have some level of interest in him overall as was evidenced on Thursday at the Clemson pro day. It also sounds like he could see himself playing in the Steelers offense as well.

"I can show you what makes Travis Etienne the best RB in the draft class."@Movethesticks breaks down the 📽