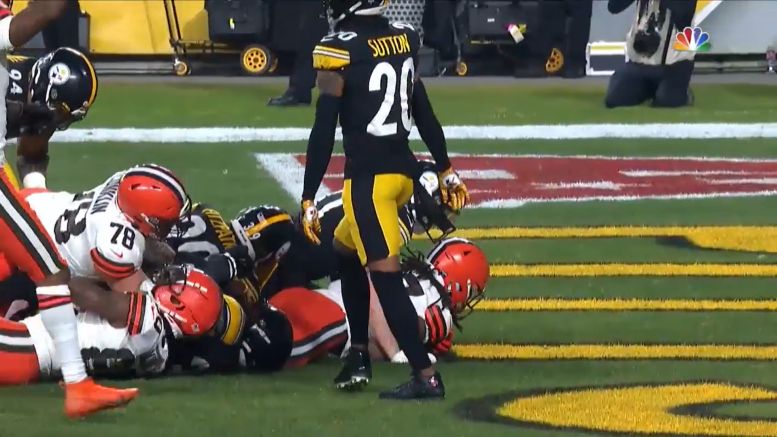 Cam Sutton is happy to return to the Pittsburgh Steelers. Now he wants to return to the playoffs and win a game. Sutton has yet to advance in the postseason in his four-year, NFL career. And he knows as well as anyone how painful the last two playoff exits have been.

He joined Sirius XM Radio’s Lance Medow and Torry Holt for an interview after inking a two-year, $9 million contract with the Steelers yesterday. Sutton outlined his goals for the next two seasons.

“And I’m just coming with an attitude, coming with a mindset that it’s all or nothing,” he told the show. “We don’t have time to continue to wait and waste and stall and wait around on things. We all have goals. We all have visions. I know you’re just speaking to me right now, but I can say the same thing for the rest of the organization and just Pittsburgh alone.”

Sutton spoke to the frustration of the team’s last two playoff appearances. There was his rookie year back in 2017. Despite being heavy favorites against Jacksonville, the Steelers were upset and bounced 45-42. This past season, Pittsburgh went one-and-done after losing to the Cleveland Browns at home in another shootout defeat, 48-37. Baker Mayfield threw for three touchdowns, the Browns taking a 35-10 lead at halftime and holding on the rest of the way.

The Steelers haven’t won a playoff game since 2016 and have just three playoff victories over the last decade. Unacceptable results for teams who have had as much talent as Pittsburgh.

“We’re tired of coming up short, you know what I mean? ” Sutton said. “There’s been times that obviously the past couple of years where we had great teams or great pieces and everything looks good. It’s just, we slip up in those final moments, in those critical moments. And we’re not just able to create the success that we want to. Obviously you get tired of watching teams going to the Super Bowl every year and [you’re] losing early into playoffs.”

Making a playoff run will be harder in 2021. Pittsburgh has been and will continue to be as gutted as any team over the next 48 hours, losing starter after starter. Though they retained Sutton, Bud Dupree signed with the Tennessee Titans while Matt Feiler is headed west to play for the Chargers. WR JuJu Smith-Schuster, CB Mike Hilton, and OT Alejandro Villanueva are all expected to sign elsewhere in the coming days.

But Sutton certainly has the right mentality and the Steelers still have the talent to compete for the AFC North Title and make the playoffs. And once you get into the postseason, anything can happen.