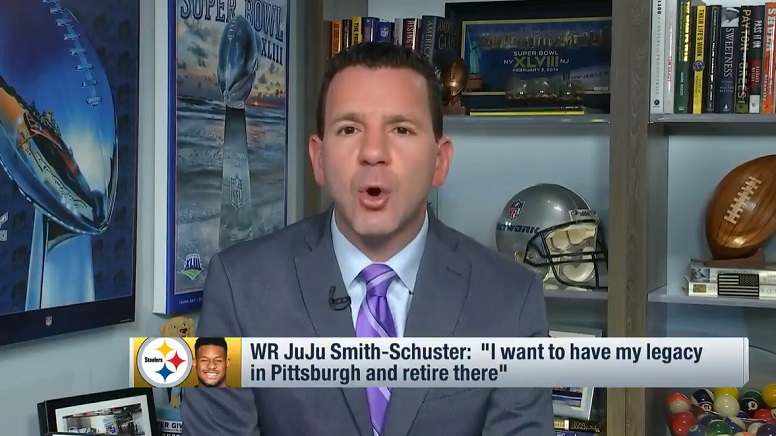 Barring him re-signing with the Pittsburgh Steelers in the next three weeks, wide receiver JuJu Smith-Schuster will become an unrestricted free agent on March 17, the start of the new league year. And while Smith-Schuster has made it clear several times this offseason that he wants to remain with the Steelers in 2021 and beyond, it’s unfortunately beginning to look more and more like he’ll ultimately sign with a different team three to four weeks from now.

On Wednesday, Ian Rapoport of the NFL Network was asked his thoughts on Smith-Schuster and if he believes there’s a chance the former second-round draft pick out of USC has any chance at re-signing with the Steelers before he becomes an unrestricted free agent on March 17.

Ian on JuJu and the #Steelers pic.twitter.com/sWyFZ8F84N

“Yeah, that’s a little bit of a different situation for JuJu Smith Schuster,” Rapoport said. “First of all, look at all of the standout receivers coming up in free agency. So many of those guys are not going to be available from Kenny Golladay or Chris Godwin, a lot of those guys are going to be franchise tagged, which means JuJu is potentially one of the top receivers available in free agency with the Steelers not able to use the franchise tag because of cap space. It’s possible. I’m not saying it’s impossible for him to be back in Pittsburgh but look at their cap situation. As of right now, still plenty over the cap. He’s going to command a big salary. They could do it, but they would have a lot of work to get done to fit a potential free agent contract for JuJu Smith-Schuster under the cap for 2021.”

Rapoport is obviously right on the money here with his assessment of Smith-Schuster and especially when it comes to him potentially being one of the top unrestricted free agent prizes this offseason at the wide receiver position. I’ve contended for several months now that Smith-Schuster’s likely free agent market value will be around $17.5 million, and I even put together a mock contract together for him way back in October that includes a 2021 cap charge of $6.4 million.

Uncle Dave is just going to leave this right here for five months in case he needs it. Don't touch it. Don't even look at it. Run along, you meddling kids #Steelers pic.twitter.com/d6x42PgIiv

Could Smith-Schuster’s market value ultimately come in a little bit lower than my $17.5 million estimation? Absolutely, but if it does, I can’t see it being below $16 million. At lowest, Smith-Schuster’s 2021 cap charge might be around $5 million and even that number seems tough for the Steelers to afford with three weeks to go before the star of the new league year and especially if the league-wide cap number for 2021 comes in under $185 million.

As Rapoport said on Wednesday, while Smith-Schuster re-signing with the Steelers is improbable, it’s not totally out of the question and especially if the Steelers finally let go of some of their longstanding lucrative contract traditions when it comes to not fully guaranteeing more than the first year of the deal. In short, if they decided to sign Smith-Schuster to long-term deal at around $16-$17.5 million and fully guarantee the first two years of it, they could get a lot more creative with his 2021 year and thus keep his initial cap charge below $5 million, which in turn make it easier to re-sign him.

Pending the new contract for Steelers quarterback Ben Roethlisberger, the Steelers are currently around $7 million over a cap number of $185 million and $12 million over a $180 million cap number. Roethlisberger’s new deal, assuming it gets done, could free up as much as $14.34 million in 2021 salary cap space if he’s extended for four years with no new money and doesn’t take a pay cut. Additionally, the team is likely to restructure the contract of defensive end Stephon Tuitt in the next few weeks and in doing so, that should free up nearly $4 million more in 2021 salary cap space. If they cut inside linebacker Vince Williams, the Steelers would have another $3.34 million in 2021 salary cap space to work with.

In closing, whether or not Smith-Schuster is re-signed in the next three weeks is entirely up to the Steelers and how bad they want to retain. It can be done, but reiterating what Rapoport said on Wednesday, they still have a lot of work to do to make that happen.