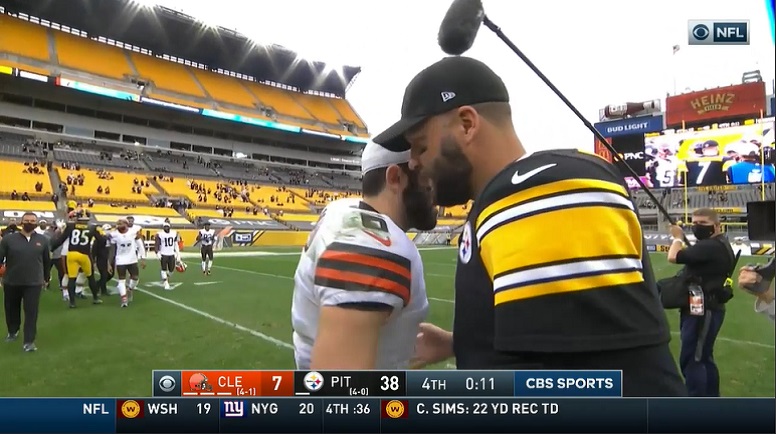 Could the Pittsburgh Steelers and Cleveland Browns play each other for a third time this season? There’s a real possibility of that happening. Not that Mike Tomlin is focusing on those sorts of things. During his weekly Mike Tomlin Show with Bob Pompeani, Tomlin said he isn’t entertaining the idea about facing the Browns during next week’s playoffs.

“We hadn’t worried too much about some of those scenarios,” Tomlin said. “We like to live one step at a time, particularly because we’re so familiar with so many people in the field. We’ve been in the stadium with just about everybody that we could potentially see in Round One minus the Dolphins. We played those guys a year ago. So there’s some familiarity there. We have our attention focused squarely on the Cleveland Browns and appropriately so.”‘

It’s possible the Steelers face the Browns, Ravens, Titans, Colts or Dolphins during Wild card weekend. As Tomlin said, the Steelers have played every one of those teams sans Miami this season. And they’re undefeated against that group.

But the Browns are the most likely candidate for the Steelers to face. If Cleveland wins today, the Steelers are locked into the #3 seed, meaning they’ll face whoever is the #6 seed. Should the Baltimore Ravens beat the Cincinnati Bengals and the Buffalo Bills defeat the Miami Dolphins, Cleveland will come to Heinz Field next weekend. There are several other scenarios that would allow for a third matchup between the Steelers and Browns, too.

It would make for one heck of a storyline for the Browns and their postseason history. They’d be back in the playoffs for the first time since 2002 when they face…the Pittsburgh Steelers. That game ended in spectacular fashion, Pittsburgh rallying from two-scores down with five minutes left to win 36-33. Chris Fumatau Ma’afala scored the game-winning touchdown from three yards out to complete the comeback.

Of course, Tomlin’s focus is correct for a head coach. His intention certainly is to win today’s game. If the Steelers knock off the Browns, Pittsburgh probably won’t have to worry about seeing Cleveland in the playoffs. Mostly because the Browns will likely be watching from home. Their path to reach the postseason is narrow, needing the Jaguars to beat the Colts to get in.