The Pittsburgh Steelers have now released what will likely be their final injury report of Week 17 ahead of the team’s Sunday road game against the Cleveland Browns and the Friday offering shows that two players are now officially ruled out for it.

After failing to practice again on Friday, the Steelers ruled out safety Terrell Edmunds and kicker Chris Boswell for the team’s Sunday road game against the Browns.

With Boswell out, it will be interesting to see if the Steelers sign kicker Matthew Wright from the practice squad. Wright would need to be signed as he is out of free elevations. The steelers could decide to elevate punter Corliss Waitman, if he can handle place kicking and kickoff duties. This will be the first game of his NFL career that Edmunds has missed.

Boswell and Edmunds are the only two players to receive game designations on the Friday injury report.

Practicing fully for the Steelers on Friday were defensive tackle Tyson Alualu (ankle), guard David DeCastro (not injury related), defensive end Stephon Tuitt (back), outside linebacker Olasunkanmi Adeniyi (shoulder), and safety S Marcus Allen (neck). All are likely to play in some capacity Sunday against the Browns.

UPDATE: The Steelers have now officially ruled out Roethlisberger for Sunday on their update Frida afternoon injury report. 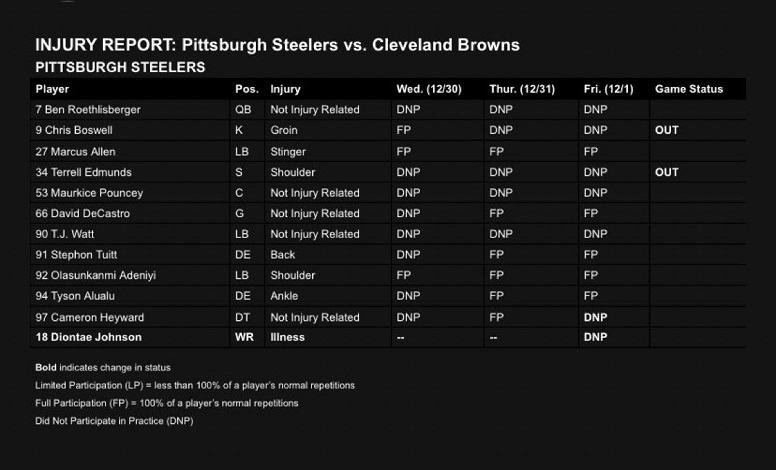