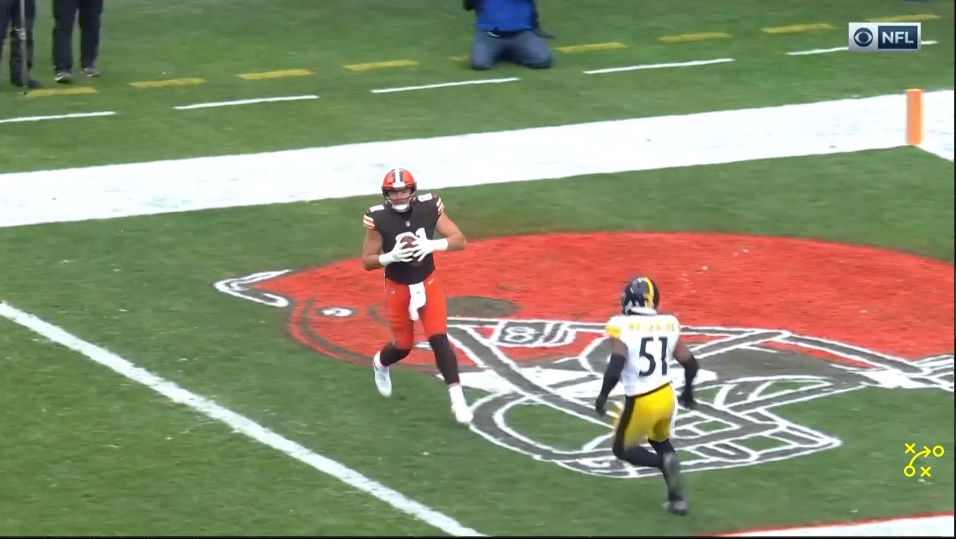 For the first time of the postseason, the first playoff scouting report in a couple years, our breakdown of the Cleveland Browns’ offense. Our scouting reports for Cleveland will look a little different from the norm given the fact this is the third time these two teams face and the second time in as many weeks. At this point, I think you guys have an understanding of their general team outlook.

So instead, our focus will be on more specific issues. The theme of these reports, offense and defense, are “what are the biggest problems the Browns pose to the Steelers?” Those are highlighted below.

The Browns’ run game is dangerous, the identify of their offense, and we’ll discuss that in a moment. But there’s a couple of concepts and philosophies in the pass game. One is something we covered earlier in the week. Cleveland going heavy, which aides them to run, but also running empty sets out of it and spreading the field. They did this 11 times on Sunday. Of their nine pass attempts, Baker Mayfield went 7/9 for 72 yards. They didn’t hit any massive, chunk plays off it, but they moved the sticks on third down or put themselves in manageable third down situations. One completion took them from 2nd and 17 to 3rd and 3. Another took them from 2nd and 9 to 3rd and 2.

What’s the best way for Pittsburgh to counter this? Don’t play two high. They did this a ton Sunday. Maybe that was a personnel thing, maybe that was just their in-game decision, a “safe” call versus empty. In one instance though, they played with a single high safety, running Cover 1. And it worked. Mayfield completed the pass to David Njoku but it lost a yard.

So out of empty, they have to play one high and man up more often than not.

Another concept the Browns used several times was Hoss Y Juke. Made famous by the Patriots, this is a mirrored concept. Outside receivers run curls, slot receivers run down the seam, and the tight end/#3 runs a choice route over the middle of the field. Rob Gronkowski made a killing on these routes.

One other concept in the low red zone/goal line that worked well. Twice, they ran a Y cross/leak play. Both times the TE got open on the backside. Mayfield hit Austin Hooper for a TD the second time. Probably saw that on the film after the first call and dialed it back up their next trip.

The run game has its own schematic focuses, some of the pin/pull schemes we highlighted in last week’s report. But there’s a lot to focus individually, which Josh will cover below. Keith Butler’s comments about leg drive and wrapping up mean as much as anything. You can have a great scheme and plan but if you don’t tackle Nick Chubb, nothing drawn up on a whiteboard really matters.

I’m going to switch things up a bit this week, considering you just read about the Browns’ personnel last week and not much has changed.

This week, I’m going to focus on Nick Chubb, who is the focal point of the Browns’ offense, and the one guy who can singlehandedly win the Wild Card matchup for the Browns on Sunday at Heinz Field.

Make no mistake about it: the Browns’ offense goes as Nick Chubb goes. It’s certainly helped with Kevin Stefanski coming in and establishing a run-first offense. He has the perfect back in Chubb, who — for my money — is the best pure running back in football, full stop.

Chubb is the perfect back for Stefanski’s system. He has great contact balance and is a terrific combination of speed and power. Lately, Chubb has added some pass catching abilities, helping the Browns turn into a really solid screen team under Stefanski.

With TJ Watt back in the fold on Sunday, the Browns could try and take advantage of the aggressiveness of the pass rush from Pittsburgh by hitting them with a number of screen.

Cleveland did something similar against Tennessee and Baltimore earlier in the year, so it would only make sense to deploy it against Pittsburgh.

Chubb really does a fantastic job setting up the screen. He doesn’t rush into the route, allowing his linemen to set up the blocks.

Once he’s in the open field you know how dangerous he is.

One thing that worries me this week with Chubb is his ability to hit cutback lanes and rip off explosive runs. Pittsburgh has had a tough time staying disciplined against the run as of late, opening up some massive lanes.

In Cleveland’s system, cutback lanes are essentially built into the zone scheme.

Chubb has great feet and really has impressive balance. He never gets his weight out over his skis and really moves well. Once he’s in space, again, he can rip off some explosive plays.

Vision is a big part of Chubb’s game. It’s at a level in the NFL that is the elite of the elite.

You can see a lane opening to his right, but he sees the slim gap opening between the guard and center. He’s not rushed when hitting the seam, allowing his blocks to develop.

Once he hits the hole though, he’s gone for the 14-yard touchdown, on which he’s practically untouched.

It’s worth noting that this run occurs right at Chris Wormley, who played in place of Cam Heyward in the Week 17 game. However, it shows just how good Chubb is at setting up defenders and then finishing runs.

Chubbs sells outside just a bit to get cornerback Steven Nelson to bite downhill on the first run of the game, before then bursting inside behind left tackle Jedrick Wills Jr., who washes down the left side of the line to open the crease.

After that, Chubb finishes off the run so well, forcing a number of Steelers’ defenders to get in on the tackle. It’s just a poor run fit by the Steelers, which was something that was very evident on Sunday.

Again, this is good patience from Chubb to let the hole develop, and good power to finish off the run from deep in his own end.

Pittsburgh catches a break with Joel Bitonio out of the Sunday night Wild Card matchup due to COVID-19, giving Cam Heyward a juicy matchup against rookie Nick Harris, but the Steelers can’t overlook the run game.

Cleveland had a ton of success in the Week 17 matchup on the ground, so hopefully the Browns tipped their hand a bit on some runs, allowing the Steelers to be better prepared.

If Pittsburgh can slow down Chubb and force the Browns to turn away from the run just a bit, I like their chances with Baker Mayfield throwing the ball to a depleted receivers room that will likely be without Donovan Peoples-Jones.