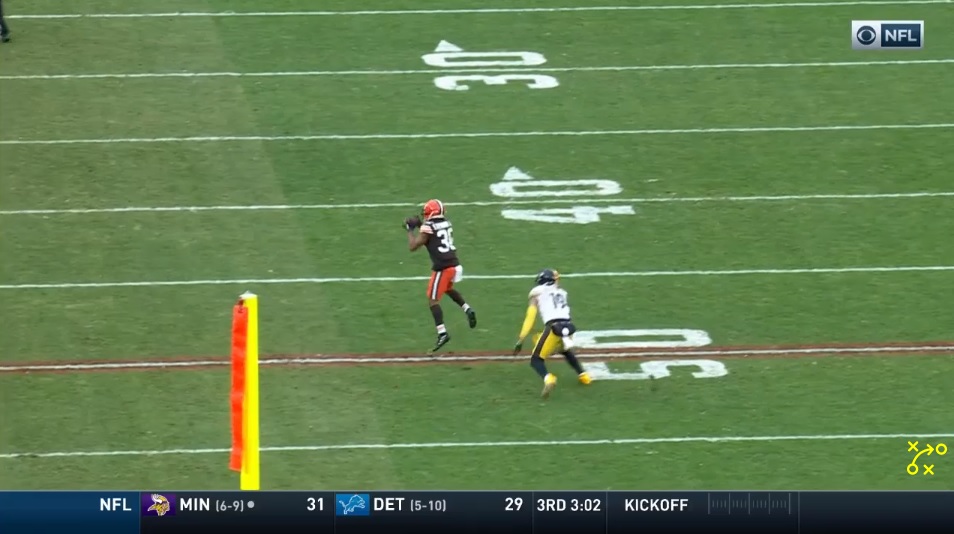 For the first time of the postseason, the first playoff scouting report in a couple years, our breakdown of the Cleveland Browns’ offense. Our scouting reports for Cleveland will look a little different from the norm given the fact this is the third time these two teams face and the second time in as many weeks. At this point, I think you guys have an understanding of their general team outlook.

So instead, our focus will be on more specific issues. The theme of these reports, offense and defense, are “what are the biggest problems the Browns pose to the Steelers?” Those are highlighted below.

I’ll admit there’s less to worry about with the Browns’ defense compared to my concerns with their offense. At least from a schematic standpoint. Tom makes some great points in his section below about the individual side of things.

Though not known as a blitz-heavy team, they did have one successful blitz concept in Week 17. Led to Mason Rudolph’s INT. Overload blitz bringing the frontside linebacker linebacker through the A gap with the backside DB off the edge. Two examples of it from the second half.

One of the biggest situations where you need to pay special attention to what defenses do comes on third down. I’ve charted every passing third down Pittsburgh had against Cleveland. Fifteen in total. Here’s the results against 2×2 and 3×1 formations.

What’s interesting overall about both is how often they brought pressure. Cleveland came into the game with one of the lowest blitz rates in football. On third down against any alignment, they blitzed 66.7% of the time. One-third of the time, they brought the nickel corner, most often from the field side.

When it comes to the run game, I don’t have a lot of hope. The key here is to control the line of scrimmage against the Browns’ 4-3 front. Have to win at the first level and more those defensive linemen. Steelers, like they’ve done too often before, let LBs run free because no linemen was able to climb to the second level. And I don’t care what your scheme is; if LBs are uncovered, they’re going to shut down your run game.

Ed Note: Tom’s report centers around replacing DE Oliver Vernon, who will miss the rest of the season due to a torn Achilles suffered in Week 17’s victory.

In the fourth quarter of the game last week Cleveland lost a big part of their defense when starting defensive end Olivier Vernon ruptured his Achilles. The Steelers understand this all too well after losing a productive pass rusher when Bud Dupree went down earlier in the year.  Alex Highsmith has stepped in and has played well in his stead and now the Browns hope to find similar stability with their next man up.

Vernon had a very good year being second on the team with nine sacks which was the second highest number of his career and best since his sophomore season in 2013 He also had twenty-seven pressures,  twelve tackles for a loss and sixteen quarterback hits. After Vernon the next highest number of sacks is 4.5 by defensive tackle Sheldon Richardson. Vernon will be hard to replace so let’s take a look at the candidates.

He is a ten year veteran who has become somewhat of a defensive lineman for hire recently changing teams each of the last four years going from Atlanta to New England and back to Atlanta before this year in Cleveland. He has 40 sacks in his career with a high of 9.5 in 2017. In a game that season against Dallas he has SIX sacks.

This season in he has been used as a rotational defensive lineman that they also bring in on passing downs when they move Myles Garrett inside. In 404 snaps he 12 tackles, 3.5 sacks, 14 pressures, 3 tackles for a loss and 7 hits on the quarterback.

A majority of Clayborn’s reps come on passing downs and he is the best pass rusher of the candidates. He has solid quickness at the snap and has some variance to his pass rush.  Most of his success comes around the edge using his hands on chops and rips and still has solid bend around the edge.  He will use power rushes as well trying to get underneath the pads of offensive tackles to drive them back to the quarterback.

Against the run, he uses his hands well to hold off blockers and has the play strength to set the edge. He has a good motor and is a strong tackler. He slides well laterally with blockers and will aggressively chase the ball carrier.

His first sack of the season was against Baltimore. Coming from the left side of the screen Clayborn (94) will use a cross chop on the outside arm and then shows good bend at the top to flatten and get to the quarterback.

Against Cincinnati, he’ll come from the right side and missed with a chop but gets his left hand into the chest of the left tackle and uses strength and leverage to push him back into the quarterback and get the sack.

Last week against Pittsburgh he shows off his strength and uses good leverage when bull rushing and pushes the blocker into the quarterback and forcing the errant throw.

He is a second year player with twenty games played and three starts.  He has played 326 snaps this season and is better against the run than as a pass rusher.  In fact he has only one career sack and that came last year in his first career game. This season he has 30 total tackles, 13 solo with 6 pressures, 2 tackles for a loss and two quarterback hits. While Clayborn has played more on the right side, Gustin has had most of his reps on the left side.

He has solid initial quickness but overall is limited athletically.  He is a high effort player with heavy feet and solid play strength. He was a productive collegiate player with 21.5 sacks in four years but that hasn’t shown up on the pro level.

When rushing the passer he is somewhat limited.  He uses a variety of swipes and chops to fight the hands of the blocker but his pass rush arsenal is pretty much power rushes. They will also use him on twists to the inside to aid him in getting in the pocket and he has had some success there.

Against the run, he can set the edge and is solid when it comes to stacking and shedding blockers though he is a tad slow getting off the blocks.  He does show good short area quickness when asked to shoot the gaps and can get in the backfield and he can sniff out and make plays from the backside.

Here is his lone career sack in 2019 against the Dolphins. From the left side of the screen, Gustin (97) will come with a straight bull rush using leverage to turn the left tackle and dive for the sack.

Against Las Vegas, Gustin is on the right side of the screen (opposite TE Jason Witten 82) and at the snap he will shoot through the C gap inside Witten and track down the running back. Clayborn is on the other side setting the edge clogging up the running lane.

Here is an impressive play near the goal line. He is lined up over the right tackle and at the snap he will quickly swim over the tackle before fighting around the pulling left guard and makes the first hit on the ball carrier to keep him out of the end zone.

Jackson is another second year player and he has had limited reps this season.  His only action was in weeks 2 through 4 getting 71 total snaps playing on the left and right side. On the season he has 5 tackles 2 solo with one pressure and one fumble recovery. He was inactive last week versus Pittsburgh.

Against the pass he is a power rusher with limited lateral agility and bend. He can get push into the pocket when he keeps his pads low. Against the run, he has the strength to hold the edge and can shed blockers. He shows solid pursuit to the ball but lacks foot speed.

The loss of Vernon not only affects their starting lineup but also their sub packages as well.  On passing downs they would normally use Vernon, Garrett, Clayborn and Sheldon Richardson.  They’ll probably have to use Clayborn and Garrett on the edge and keep their defensive tackles (Larry Ogunjobi or Jordan Elliott) on the field for additional reps.

My guess is they would use Gustin as the early down player and bring Clayborn in on passing downs and employ additional blitzes. Cleveland is 29th in the league blitzing on only 21.3% of their plays and they get pressure on 20% of drop backs but it’s the playoffs and they’ll do everything they can to replace the loss of Vernon.