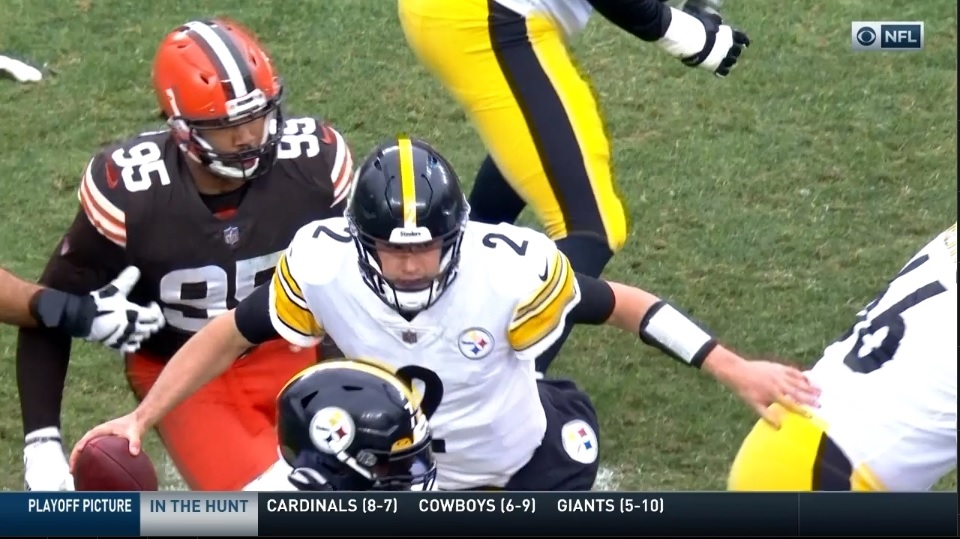 Any idea of there being a legitimate Mason Rudolph/Myles Garrett storyline Sunday was solely a creation of the media. Though this was their first meeting since last year’s infamous ending, Rudolph said he hardly interacted with Garrett Sunday. The only time they talked was at the end of the game.

Rudolph was asked if he spoke to Garrett at all Sunday.

“Myles came over and said good game,” Rudolph said. “Post game. And that’s all it was. I told him good luck. Lot of respect for him.”

Browns’ reporter Dan Labbe posted these two tweets noting that Garrett and Rudolph shook hands after the game along with this shot captured by photographer JD Kuntz.

Here's a photo of Myles and Mason meeting up after the game from @JD_Kuntz pic.twitter.com/CXAAv3yyfT

Garrett finished the game with four tackles, three solo, and one pass breakup as he dropped into coverage. He nearly had a sack of Rudolph but Alejandro Villanueva grabbed Garrett’s arm, resulting in a holding call, that negated the chance. Rudolph ended Sunday throwing the ball 39 times for 315 yards, two touchdowns, and an interception.

The focus Sunday, rightfully so, was on football. This game meant plenty more to Rudolph and Garrett than rehashing their history. For Garrett, it was a chance to get his team in the playoffs for the first time since 2002, snapping the longest drought in football. For Rudolph, it was a chance for his first start of the season. Who knows how many more he’ll make in Pittsburgh.

Now, the focus for both men – and both teams – will be about beating the other in the postseason. Rudolph won’t be slated to start, of course, but he’ll be one snap away as Ben Roethlisberger’s backup. Garrett and the Browns will aim for their first playoff win since 1994. To put that in perspective, the last time Cleveland won a playoff game, neither Garrett or Rudolph were born yet.