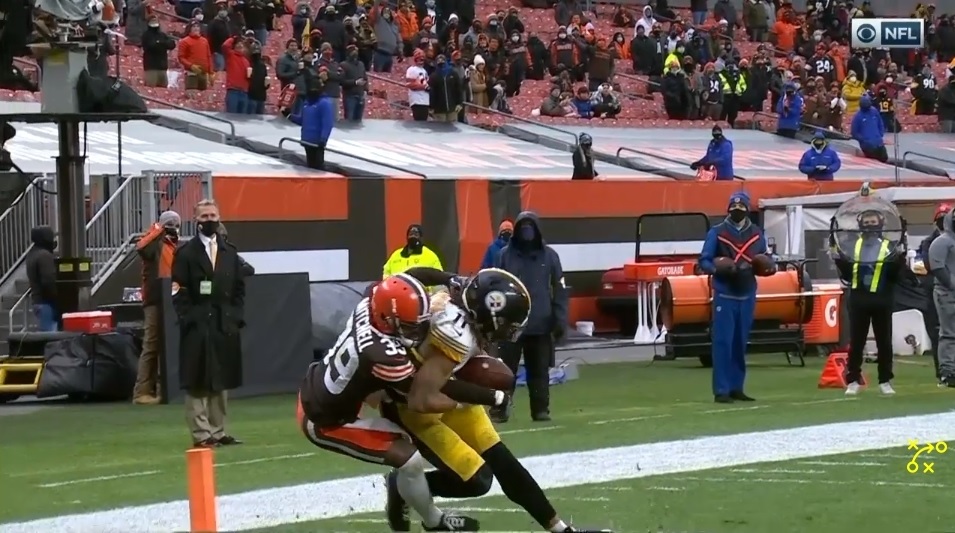 In what was basically a throw-away game for the Pittsburgh Steelers, they treated fans to a true show of heart and determination, pushing the Cleveland Browns to the brink of elimination from the playoffs before falling 24-22, setting up a wild card round matchup next week between the two heated rivals.

Against Cleveland Sunday, Mason Rudolph looked really solid in his first start since Nov. 24, 2019, pushing the football down the field with success, throwing strikes to Diontae Johnson, Chase Claypool and JuJu Smith-Schuster, giving the Steelers’ offense life in the second half.

Defensively, the Steelers were down a number of key starters but fought hard, forcing a late turnover on downs that led to a score and a two-point game. Plus, we saw continued growth from Alex Highsmith as a pass rusher and saw Stephon Tuitt record a career-high in sacks on the year, making a push for All-Pro status.

Aside from his ugly third quarter interception that gave me some PTSD from 2019, Mason Rudolph looked really solid Sunday, showcasing confidence with pushing the football down the field, and showed off some good pocket awareness in the second half, sliding around to avoid pressure and make throws.

He was really good on third down too, consistently moving the chains. He threw a beautiful deep ball to Diontae Johnson early on down the right sideline, and fired a dart across the middle to Smith-Schuster in tight coverage to convert.

On the interception, he let pressure affect him and took a shot to the head while throwing a woeful ball across the middle.

All that said, it was a good game to build off of for Rudolph, who looked confident and mature from a year ago. Everything I wanted to see from Rudolph on Sunday, he showed. He needs to clean up some touch on short throws, but overall he had a good game, finishing 22-for-39 for 315 yards, two scores and a pick.

It was nice to see Joshua Dobbs used in the read-option role. He rushed just twice for 20 yards, but it was an added wrinkle to the offense on Sunday, giving the Browns something to adjust to.

James Conner started strong on Sunday with four carries for 22 yards, but after that he carried the ball just five more times for 15 yards, finishing with nine totes for 37 yards on the ground.

He looked good forcing defenders to miss in the hole, creating something out of nothing a few times. As a receiver, Conner hauled in another five passes for 25 yards, serving as a solid checkdown for Rudolph.

The Steelers gave rookie Anthony McFarland a lot of run on Sunday over Benny Snell Jr. McFarland didn’t look very good, but flashed on a couple of carries. The game still looks to fast for him though. He doesn’t follow blockers well – especially pulling linemen – and doesn’t set up blocks well. If the game can slow down for him though, look out.

Snell received just three touches on Sunday and ran for 10 yards, barreling through a defender to move the chains on one.

Claypool looked like his early-season version Sunday, finishing with five catches for 101 yards and a touchdown. Claypool connected with Rudolph twice on deep shots, including his 41-yard touchdown on fourth down in the fourth quarter, making it a two-score game. His adjustment on the ball through contact was outstanding.

Johnson hit a couple of home runs with Rudolph and had a clutch third-down catch to move the chains. All three of Johnson’s catches moved the chains on Sunday, which is on par with what he’s done much of the season.

Smith-Schuster came into the game with a chance to hit 100 catches on the year. He came up short, but was outstanding Sunday, finishing with six catches for 65 yards and a score, which made it a two-point game.

James Washington was targeted just twice and didn’t come down with a catch, while Ray-Ray McCloud was stuck in the jet sweep role, which went for a combined -3 yards on two touches.

I don’t think it’s a coincidence that the run game improved slightly on Sunday with Vance McDonald as the No. 1 tight end. McDonald did a good job opening up some holes on Sunday, and got going as a receiving option, finishing with five catches for 33 yards in the loss.

Kevin Rader was elevated from the practice squad and played well on special teams, recording a highlight reel stick on a kickoff. Rader did drop his one lone target on the day though, a third-down throw from Rudolph that would have been short of the chains.

I thought David DeCastro was the best lineman of the bunch on Sunday. He looked really good in the run game – especially on the move – and was strong in pass protection against Sheldon Richardson and Larry Ogunjobi.

Aside from DeCastro it was really hit or miss from the group up front.

Alejandro Villanueva has looked really old and passive in the last few weeks. Adrian Clayborn gave him fits on Sunday with power, getting into his frame consistently for two quarterback hits on the day.

Chukwuma Okorafor gave up a sack to Olivier Vernon and looked rough throughout the game, while Kevin Dotson flashed a bit in the run game but had some bad whiffs on the move, namely on the shovel pass to McDonald from Dobbs in the second half.

JC Hassenauer was called for ineligible man downfield on a failed screen, but other than that was passable.

With no Cam Heyward on Sunday, I was a bit worried about the Steelers’ DL against the run. Overall though, I thought the young group up front was passable against the run and generated good rushes against Baker Mayfield.

Chris Wormley came through with a sack, extending the Steelers’ streak to 73 games, while Stephon Tuitt recorded a sack, giving him a career high 11 on the year. He should get some All-Pro buzz.

Tyson Alualu played well against the run, finishing with three tackles and a batted pass.

It was bizarre to see Carlos Davis and Isaiah Buggs fighting on the sideline, but they showed fight on the field, combining for two tackles, showing good push against the run. Henry Mondeaux…if he can add a pass rush move he could be a real serviceable rotational defensive lineman. He was popping off the screen a couple of times in the game.

Man, I’m so impressed with Alex Highsmith. He’s getting better and better the more reps he gets. He made top 10 pick Jedrick Wills Jr. look silly on a number of reps on Sunday. He played the run well, showed good hustle and heart and really set the tone for the defense.

Highsmith led the way with nine tackles, a sack, a tackle for loss and a quarterback hit on the day. He reminds me a lot of LaMarr Woodley with how advanced he is as a pass rusher at such a young age.

Opposite Highsmith, we didn’t see much from Jayrone Elliott or Ola Adeniyi. Elliott had a huge hit on Nick Chubb early in the game, and added a sack, but he was relatively quiet throughout. Adeniyi, he was pulled down on a blatant hold late in the game. That’s about the only notable thing from his game. He played a career-high in snaps and didn’t even hit the stats sheet. Yikes.

Inside, Avery Williamson had another strong game against the run. He was slow to flow early in the game, but cleaned it up after the first series and played well. Williamson did get lost on Austin Hooper’s touchdown though, which is something the Browns will undoubtedly use next week in a similar situation.

Here’s hoping Vince Williams is healthy for next week. He was receiving treatment on the sideline after halftime and I don’t think we saw him at all in the second half. When he was in the game he was slow to get off blocks on the first drive and really wasn’t impactful against the run.

Marcus Allen was fine in his place, finishing with seven stops and a tackle for loss. He whiffed on a couple of plays though, which shouldn’t be surprising considering his tackling issues in the last month or so.

Aside from Minkah Fitzpatrick’s horrendous run rep on Chubb’s 47-yard touchdown run to open the game, he played well in a game he had no business being in. Fitzpatrick came downhill against the run well after that, finishing with five stops. He broke up a key pass in the end zone and was in tight coverage on an third down incompletion in the end zone, forcing the Browns to settle for a field goal.

Sean Davis played well in relief of Terrell Edmunds, finishing with six stops. Davis broke up a pass, played well coming downhill against the run and looked solid overall in his first real defensive action since early in 2019.

Steven Nelson was hit or miss on Sunday, losing a couple guys in coverage. Cleveland went right after him and he was rough for the second straight week. Opposite Nelson, Cam Sutton played really well in limited action in place of Joe Haden. Justin Layne though…he did not. Layne was burned by Rashard Higgins on a 42-yard catch and run down the right sideline in which Layne was on another planet.

The Browns threw for just 196 yards, but there were a handful of missed tackles and a couple of blown coverages.

Matthew Wright was fantastic on Sunday, drilling all three field goals, showing some range on the afternoon. He doesn’t have the biggest leg, but his kicks in the cold would have been good from 50 in Cleveland. That’s comforting if Chris Boswell misses the wild card game with his groin injury.

Jordan Berry’s numbers might not look great, but he pinned the Browns inside their own 20 twice on three punts.

The only area Wright really struggled was on kickoffs. He struggles to get the ball into the end zone, which causes problems for the coverage unit. The unit allowed D’Ernest Johnson to average 26.8 yards per kick return on Sunday, including a long of 31, giving the Browns good field position.

Ray-Ray McCloud has fallen off recently on punt returns. He’s starting to dance a lot and isn’t getting up the field like he was early in the season. It’s concerning.