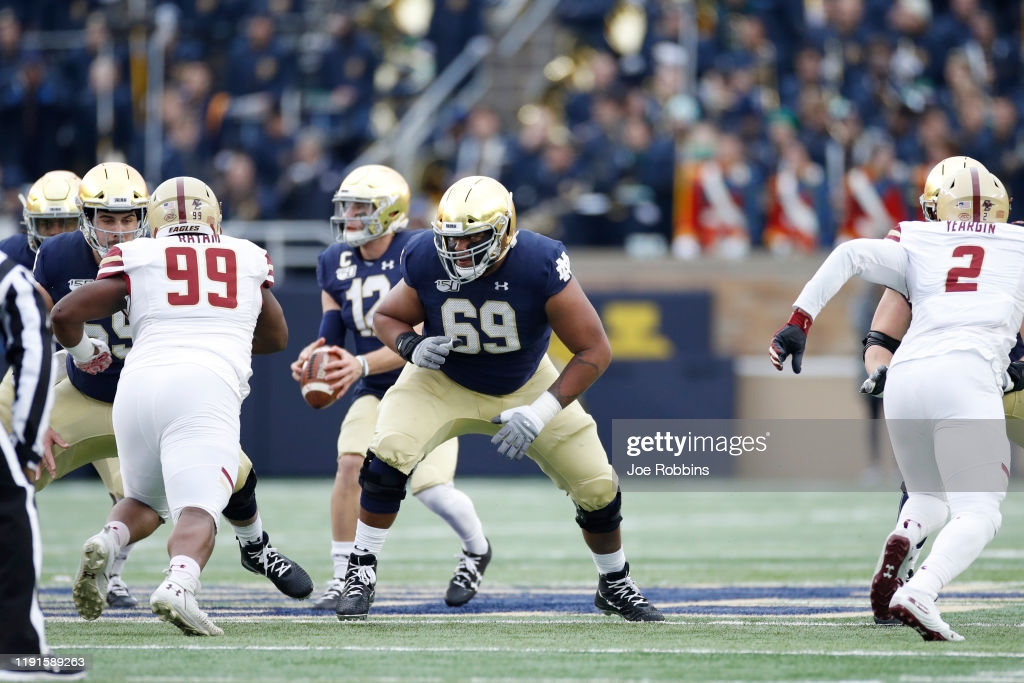 Our Day Two Senior Bowl practice report of what happened on the field down in Mobile, Alabama. This is based off the All-22 tape we have access to with a focus on team session tape. One on ones are helpful but are often skewed to be in favor of one side of the ball. So we’ll draw most of our conclusions from team sessions.

This post will be just the National Team. American Team All-22 got posted really late so hopefully I’ll have an article on that sometime later Thursday.

National Team (Coached By The Dolphins)

– Michigan FB Ben Mason is your classic FB. Big, strong lead blocker capable of washing linebackers out of their gap. Certainly can see him have a positive impact on the Steelers in short-yardage/goal line situations and on special teams. One of the first reps of today’s team session, Mason sticks and drives out the LB here with the back following behind.

– One offensive linemen who caught my attention was Notre Dame’s Aaron Banks. Had a couple really impressive reps early on. Great size at 6’5, 338 with an 82 inch wingspan. Did struggle a little bit more in pass protection later in the first team session, lunging and then falling trying to mirror the three tech who won inside.

– Northern Iowa’s Spencer Brown is the tallest man in Mobile at 6’8/4 with great length to help seal the edge against outside/speed rushes. But he’s vulnerable to getting too much depth and getting beat inside. Happened on two reps during one team session. Waist-bender where his height and lack of leverage hurts him.

– Ade Ogundeji out of Notre Dame should be on the Steelers’ radar as EDGE depth. Played a good deal of three tech today but he’s 6’4, 256 with 35 1/4 inch arms. Flashes quick hands and the ability to stay clean as a pass rusher. Repeatedly won today, first with a rip/dip past the RT and then another quick win later on in team.

– But UCLA’s Osa Odighizuwa had the rush of the day, dusting MTSU’s Robert Jones with this nasty inside spin move.

UCLA's Osa Odighizuwa might've had the move of the day. Inside spin to beat RG Robert Jones. #SeniorBowl pic.twitter.com/5qtWsRrPzc

– Liked the effort from Oregon CB Thomas Graham to finish one rep, tracking down RB UNC’s Michael Carter at the end of one play, punching the ball out from behind. Good effort and coaches surely will take notice.

– West Virginia LB Tony Fields continued to pop on screen. Like his vision and technique playing the run. Good eyes and fills the run well.

Though having a big nose tackle in front of you helps, too. On this rep, Texas’ Ta’Quon Graham(#49 – the 1T) holds the point on this double-team and Fields stays clean to close the gap.

– Washington CB Keith Taylor had one of the best reps of any DB during team sessions. Found, high-pointed and knocked away a go ball down the right sideline intended for Louisville WR Dez Fitzpatrick.

– And Oklahoma State Tylan Wallace had one of the better catches of the session. Reached across his body on this dig to make the snag.

– Defensive linemen Daelin Hayes (Notre Dame) and Shaka Toney (Penn State) had a couple of impressive bull rushes, converting speed to power, against Nebraska’s Brendan James. James lack of length allowed those guys to get into his chest and walk him into his QB.

– As expected, things weren’t as sloppy today. Fewer center/quarterback snap exchanges though there were still some. Work in progress during the week. See it every year.