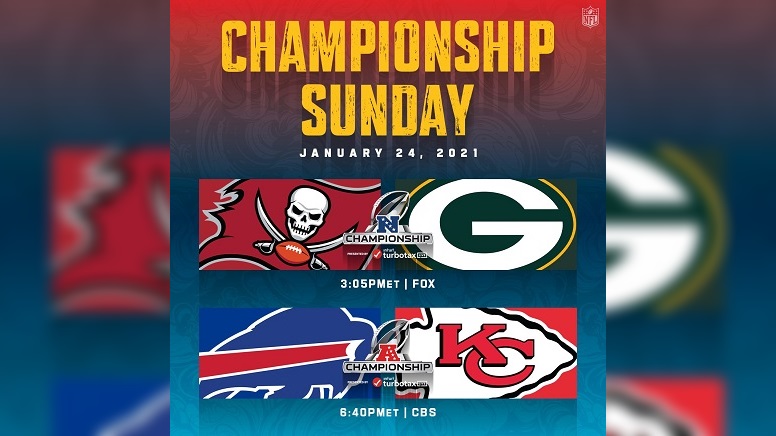 The 2020-2021 NFL season Conference Championship games are now set and will feature three of the highest-seeded teams.

In the AFC, the Kansas City Chiefs will host the Buffalo Bills next Sunday. The top-seeded Chiefs beat the Cleveland Browns on Sunday while the Bills beat the Baltimore Ravens 17-3 Saturday night at Bills Stadium.

In the Chiefs Sunday home win over the Browns, Kansas City quarterback Patrick Mahomes completed 21 of his 30 total pass attempts for 255 yards and a touchdown with no interceptions. Mahomes also rushed for 14 yards and a touchdown on three carries in the win before leaving the game later in the second half with a neck or head injury. Backup quarterback Chad Henne relieved Mahomes and completed six of his eight total pass attempts for 66 yards with an interception. The Browns defense only managed one quarterback sack on Sunday.

Chiefs tight end Travis Kelce caught eight passes for 109 yards and a touchdown against the Browns while wide receiver Tyreek Hill added eight catches of his own for 110 yards. Chiefs running back Darrel Williams rushed 13 times for 78 yards in the team’s home win over the Browns. the scored three times as well with two touchdowns coming on runs of one and five yards. The Chiefs offense registered 438 total net yards in the win.

The Chiefs built a 19-3 halftime lead before letting the Browns back in the game in the second half.

In a losing effort, Browns quarterback Baker Mayfield completed 23 of his 37 total pass attempts against the Chiefs for 204 yards with one touchdown and one interception. Mayfield rushed for 11 yards on three total caries and was also sacked once by the Chiefs defense with defensive back L’Jarius Sneed being credited with it.

As for the bills win over the Ravens Saturday night, Buffalo quarterback Josh Allen completed 23 of his 37 pass attempts in that contest for 206 yards with a touchdown and no interceptions. Bills wide receiver Stephon Diggs caught Allen’s lone touchdown pass of the game on his way to registering eight total receptions for 106 yards.

Bills cornerback Taron Johnson picked off Ravens quarterback Lamar Jackson in the second half and returned it for a 101-yard touchdown as the Buffalo cashed in on a big collapse from the Ravens to secure a place in their first AFC Championship game since the 1993-94 season.

Jackson, who failed to finish the Saturday night game due to a concussion, completed just 14 of his 24 total pass attempts against the Bills defense Saturday night for 162 yards with no touchdowns and the one interception. Jackson also rushed for 34 yards on nine total carries in the game.

The Green Bay Packers will host the Tampa Bay Buccaneers in next Sunday’s NFC Championship following both teams winning this weekend.

Packers quarterback Aaron Rodgers completed 23 of his 36 total pass attempts for 296 yards and two touchdowns in Saturday’s home win over the Rams while Green Bay wide receiver Davante Adams was on the receiving end of one of those scoring tosses on his way to registering nine receptions for 66 yards. Rodgers wasn’t sacked by the Rams defense Saturday at Lambeau Field. Packers running back Aaron Jones chipped in 99 yards and a touchdown on his 14 total carries against the Rams.

Rams quarterback Jared Goff completed 21 of his 27 total pass attempts for 174 yards and a touchdown in a losing effort. Goff, who was sacked four times on Saturday by the Packers defense, also rushed once for 6 yards during the game. Rams running back Cam Akers scored once in his team’s loss and had 90 yards on 18 carries. Rams rookie wide receiver Van Jefferson caught six passes for 46 yards and a touchdown against the Packers as well.

As for the Buccaneers beating the Saints 30-20 Sunday night, the matchup featured veteran quarterbacks Tom Brady and Drew Brees likely facing off for the final time in their respective careers as the latter is now expected to retire during the offseason.

Brady completed 18 of his 33 total pass attempts Sunday night against the Saints for 199 yards and two touchdowns passes to running back Leonard Fournette and wide receiver Mike Evans. Brady also has a one-yard quarterback sneak for a touchdown late in the game. Fournette finished the game with 44 yards on five receptions in addition to rushing 17 times for another 63 yards.

As for Brees, the veteran Saints quarterback didn’t have a great game at all Saturday night as he completed just 19 of his 34 total pass attempts for 134 yards and a touchdown with three interceptions. Saints wide receiver Tre’Quan Smith scored both of the team’s touchdowns Sunday night with one coming from Brees and the other from backup quarterback Jamesis Winston via a trick play. Smith ended the game with three catches for 85 yards and the two scores.

Saints running back Alvin Kamara had 18 rushes for 85 yards in his team’s Sunday night loss to the Buccaneers in addition to registering 20 yards on three receptions. Saints kicker Wil Lutz had two early field goals in Sunday’s game to give New Orleans a 6-0 lead.

Buccaneers kicker Ryan Succop had three field goals of his own Sunday night in his team’s win.

The Buccaneers and Packers have met each other once previously in the playoffs and that happened in the 1997 NFC Divisional Playoff Game at Lambeau Field. The Packers won that game 21-7. The teams met earlier this season in Tampa Bay with the Buccaneers winning that contest 38-10

The Chiefs and Bills have met three times previously in the playoffs with Buffalo winning two of those games. The last time the two teams met in the playoffs was in the 1993 AFC Championship Game and the Bills won that contest 30-13 at Rich Stadium in Buffalo.