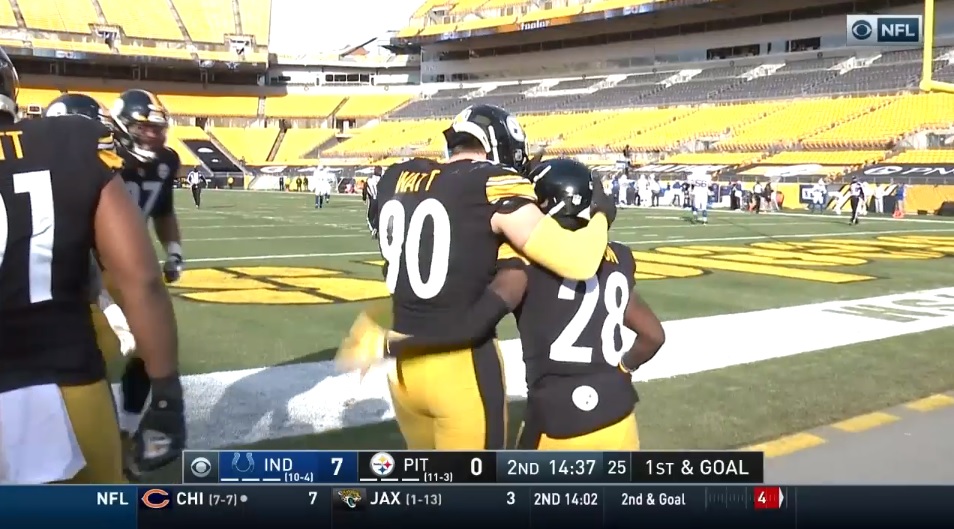 1. You Get a Play. And You Get a Play – So the Steelers are terrible at the start of games. If they script plays for the first drive like many teams do, maybe they should stop.  What I’ve noticed is they tend to use nearly every player early in the game. If I counted correctly on the first three plays they used two different running backs, two tight ends and 5 different receivers.  Why is there a need to shuffle the lineup like this? When they are playing from behind and want to try to move the ball they usually go to 11 personnel and will keep the same players on the field for several plays if not the whole drive. Maybe try not shuffling everyone on to the field and get some cohesiveness to the offense.

2. The Hokey Pokey – You know the old song, right? This is what comes to mind watching Ben Roethlisberger on pass plays. His footwork was all over the place. He’s was stepping left, throwing right, falling backwards or not stepping at all. I counted at least 6 passes in the first few drives where he wasn’t balanced and this was without pressure. When you’re bottom half isn’t right your accuracy is going to suffer. He missed low and too far out in front of slants. He had passes behind receivers later. He didn’t do this in the second half and I think the quick passing games forces him to rush and is causing bad habits.

3. Matchup Over Progressions – The short passing game that the offense has stuck with for far too long has chosen to focus on matchups rather than route development. It seems when Roethlisberger comes to the line of scrimmage he looks for what he believe to be the most advantageous pairing and will throw it that way regardless of coverage. The second half they played a more traditional offense that was able to produce plays downfield. This I think in part has led to lower production from Chase Claypool recently as a lot of his routes are intermediate and deep routes.

4. Breaking Bad – The missed tackles report last week had a dozen missed tackles and I expect this number to be high again this week. The defensive line was getting pushed around early in the game and there were plenty of guys failing to make stops. There were several plays that could have been tackled for a loss and end up as gains. One ended up a touchdown. The Colts runners ran so aggressively and didn’t go down on first contact. Jonathan Taylor and Nyheim Hines came in with a combined 13 broken tackles and may have come close to that today. The physicality is still lacking on defense.

5. Choices Were Made – But why? The end of the first half lead to more questions than answers. On 3rd and 18 with the ball on the Colts 11 yard line the offense acted like they were going to hurry to the line of scrimmage. Based on the situation that didn’t make sense and the Steelers should have called a time out. That would have left about 1:00 on clock. They let the Colts run 35 seconds off the clock.  The Steelers could have gotten the ball back with about 40 -50 seconds on the clock with one time out. Instead they had 14 seconds. That was poor clock management and shocking but then they don’t even try a Hail Mary from the 40 yard line! There were no words for my level of confusion.

6. Dead Zone Offense – Does anyone else get that feeling of dread when the Steelers get in the red zone? More specifically inside the 5 yard line. It feels like just about every other offense in the NFL has no problems in scoring when just a couple yards are needed. They have a fullback they don’t use. Even putting any fullback in the game and running play action would open up possibilities. The offensive line doesn’t get push. The receivers get minimal separation. Defenses aren’t fooled by anything they run. Seeing them near the end zone should be a good feeling.

7. Options Are Good – It doesn’t seem like the Steelers receivers run a lot of options routes. Routes where they could go inside or outside depending on the coverage.  I see of lot of receivers running into defenders because that is where the route is supposed to go. This leads to more lack of separation and tighter windows in which to throw.  The quick passing game doesn’t really allow option routes.  Maybe the success the offense had in the second half will get them to dump or at least augment what the offense will do going forward. It better.

8. Maybe it was the Mask – There were a few plays were the referees were very slow to blow the whistle to end plays. On the sack of Philip Rivers by Cam Heyward he had him wrapped up well and could have saved both men a trip to the ground. On a pass to James Washington he was wrapped up and going backwards and three other defenders were allowed time to come in and hit him.  James Conner was on his knees right in front of the side judge and with a defender touching him and they were again slow allowing another defender come in and twist him awkwardly while on the ground.  Player safety is a mantra of the league so let’s do better so we can have healthy playoff rosters.

9. Glass Houses and Throwing Stones – Late in the game a Colt player dropped a ball near the Steelers sideline and Chase Claypool decides to run up behind him an tauntingly point in his direction. Thankfully a more level headed teammate pulled him away to try to avoid any dumb taunting penalty.  Chase, weren’t you the guy that dropped a pass that should have been a touchdown when your team was down a bunch?

10. Should We Feel Better? – The offense in the second half was productive. The offensive line who many thought couldn’t block for a deeper passing game, blocked. There were questions about Roethlisberger’s knees and arm. He stepped into throws and pushed it downfield.  They scored on plays two plays over 25 yards. They didn’t have two touchdowns over 25 in a game since week 5. So what changed? Why did it change? Has it changed? Or will they go back to dink and dunk next week. If they rest starters this week we may not know for 2 weeks.  I want to have a feeling of “whew, they figured it out” but what I’m feeling is “where the heck has this been and why didn’t they do it sooner?”