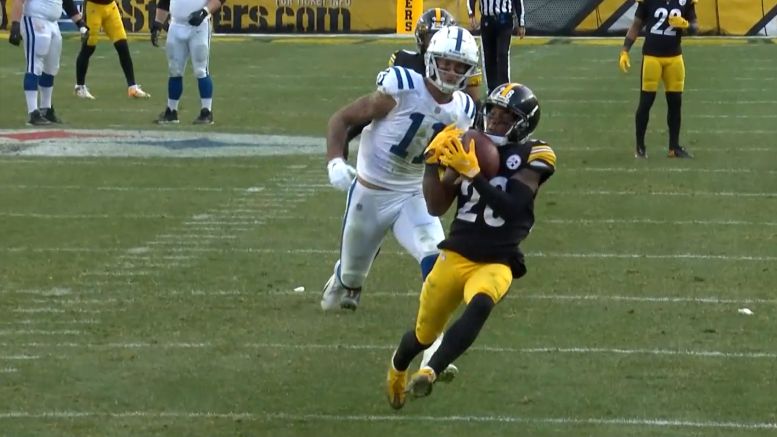 Just call Mike Hilton the little nickel who could, because that’s what the Pittsburgh Steelers cornerback has been doing for this defense for the past four years. The veteran slot defender turned in another banner performance earlier today in helping the team right the ship, recording two takeaways for a defense—and an offense—that badly needed it.

Hilton officially finished the game with four tackles, an interception, two passes defensed, and a fumble recovery. Three of his four tackles went down as defensive stops, the lone exception being a seven-yard run on second and 10 on the Indianapolis Colts’ first drive of the second half.

“Mike is a special cat on this defense”, said outside linebacker T.J. Watt, who like Hilton is in his fourth season on the 53-man roster. “He blitzes, he drops in coverage, he does man-to-man coverage. He does basically anything that we ask him to do”.

Hilton is one of the most versatile defenders in the NFL, and certainly so among cornerbacks, let alone slot cornerbacks. Despite being just 5’9” and comfortably under 200 pounds, he has no issues sticking his nose in the fan against the run, taking on lead blockers, and in beating running backs on the blitz.

Now with 50 tackles on the season, he has recorded eight tackles for loss. He has three sacks in addition to five quarterback hits, and he now has a career-high three interceptions and two fumble recoveries, for five total takeaways on the year, which ties Minkah Fitzpatrick for the most on the team this year.

“He’s a very gritty football player”, Watt said of the undersized, formerly undrafted player out of Ole Miss, who was a college teammate of 2015 second-round pick Senquez Golson. “At the end of the day, Mike Hilton makes plays for us, and we’re very fortunate to have him on our team”.

The only problem is, this may very well be the last year that the Steelers have him on their team. Cornerbacks get paid, and that is increasingly true of slot defenders as well, such as the Baltimore Ravens’ Tavon Young, who got paid despite having an injury history.

Even assuming basically a best-case scenario in which the salary cap remains static from 2020, it would still be very difficult to find a way to pay Hilton what he would command on the open market, yet it would be extremely difficult for the team to replace him.

In such situations, you just have to make the time you have count. Unfortunately, the likely final season of Bud Dupree in Pittsburgh didn’t end as it should have, with the sixth-year veteran suffering a torn ACL, though not before recording eight sacks in 11 games. It will be up to guys like Hilton to take this team across the finish line.