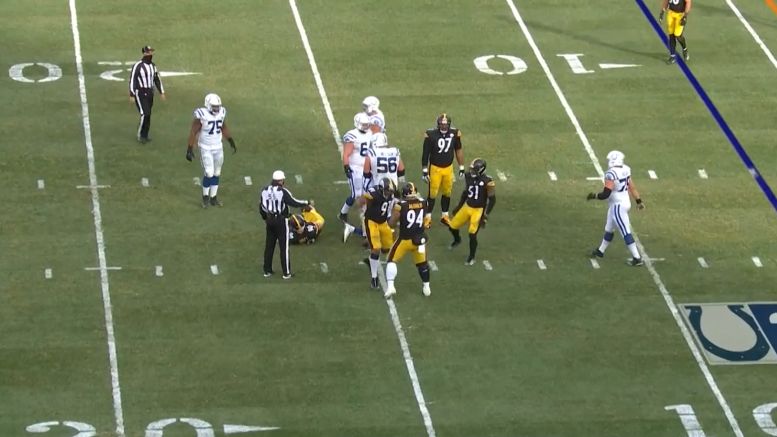 Football is, by and large, a practical sport driven by logic. You execute schemes designed (ideally) specifically to stop your opponent, which you’ve studied and practiced beating for a week. You practice the fundamentals of the game to build your skills. And it doesn’t get more tangible than being tackled by a 300-pound lineman.

But there are also a lot of intangibles tied into any human endeavor, especially in a group environment, and sometimes that can play an integral role, and serve as the difference in a game. Stephon Tuitt of the Pittsburgh Steelers believes their intangibles helped them overcome a 14-point halftime deficit to secure a crucial, division-clinching win yesterday over the Indianapolis Colts.

“The emotions is a lot”, he told reporters after the game of snapping a three-game losing streak to lock up the AFC North. “It was excitement. It was overcoming. It was brotherhood. And that’s the most important thing we did when we came back in the locker room. We all came together, we prayed, we put our heads down and we prayed, like we always do. Brotherhood”.

And drawing upon the collective will is sometimes essential in order to overcome individual shortcomings, whether in ability or in mindset. Tuitt acknowledged that the Colts were dominating them yesterday, and that it was a drain on their psyche.

“It was doubt. We got punched in the face in the first half”, he said. “They came in and they did a good job and executed the plays that they needed to make. But in the second half, we came back out, we put up a great fight, and we came out with a win”.

You need a unity in order to weather adversity as a unit. If you don’t believe in your fellow teammates, then you don’t have the motivation to fight on their behalf, or to call upon their assistance when you need it—or to assist them when it is needed.

The Steelers have had that brotherhood. That is one of the reasons that they were able to get out to an 11-0 start in the first place. It’s why they were able to mount a 17-point comeback amid a ‘here we go again’ chorus following a three-game skid.

It’s what they must rely upon as they head into the postseason as one of the top seeds in the AFC, their first appearance in the single-elimination round since 2017. They couldn’t overcome the late-season loss of Ryan Shazier that year, and the defense fell apart. This is a stronger unit, better in almost every way, even with the injuries. But they must also stay together.