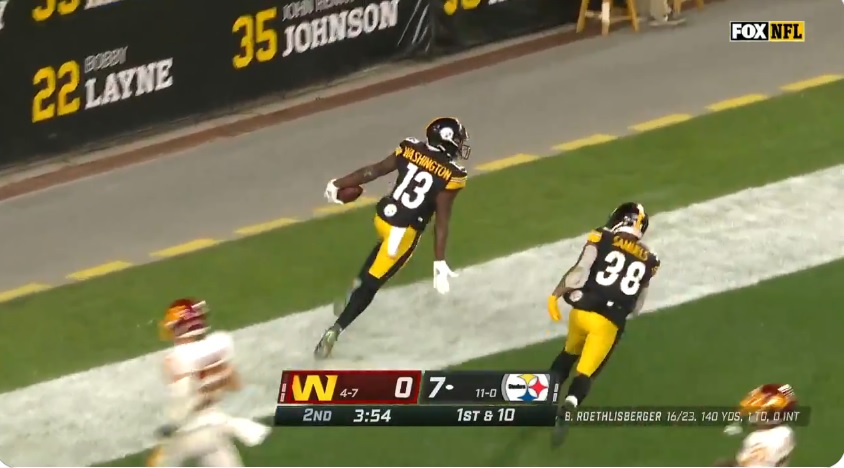 Winners and losers from the Pittsburgh Steelers 23-17 loss to the Washington Football Team on Monday.

James Washington: Ben Roethlisberger said he wanted Washington on the field more. He got his wish. Washington had one of the plays of the day, taking a short curl route 50 yards to the end zone, breaking two tackles along the way. Washington maximizes his chances and has earned that playing time.

Mike Hilton: Hilton showed why he’s going to get paid in a big way this offseason, even though it’s unlikely to be by Pittsburgh’s wallet. Pound-for-pound, one of the game’s most physical players. Nickel corner with two tackles for loss, including a key fourth down stop on an attempted jet sweep play to Washington RB JD McKissic.

TJ Watt/Cam Heyward: No worries about the loss of Bud Dupree impacting their production. Watt notched his NFL-leading 12th sack of the season and forced his first fumble of the year, though he should’ve fallen on the ball instead of trying to pick it up and run. Heyward got pressure with his bull rush all game, forcing Alex Smith to hit checkdown after checkdown,

Jordan Berry/Matthew Wright: Not a great sign with your punter on the list. But Berry was solid. Good hangtime and limited net. Washington had just one return for nine yards. Wright did his job too in his NFL debut, making both of his extra points and hitting his first career FG from 37 yards out.

Drops: Drops are apparently around the the whole holiday season. Eric Ebron and Diontae Johnson the most egregious defenders. Not fun to watch those two try to outduel themselves for the most drops. At least Johnson made some positive plays for the offense. Ebron just hurt them time and time again. Really maddening stuff from this offense.

Goal Line Offense: One of the worst goal line sequences you’re going to see just days removed from a dismal, 1-4 showing against the Baltimore Ravens. The Steelers ran play after play from the goal line. And failed, play after play. Couldn’t punch it in with Benny Snell from a yard out and they tried to throw to OT Jerald Hawkins in the flat. The pass bounced off his flailing hands and would’ve been short even if he caught it. Ultimately cost the Steelers any chance of points.

Run Game: To the larger point, the run game was as bad as it’s been all season. Which is really saying something. Washington has a stout, talented front. But the line got no push, the backs failed to create, and for what feels like the hundredth game, the Steelers largely ignored the run and put the game on Ben Roethlisberger’s arm. Pittsburgh finished the day with 21 yards on the ground, an average of just 1.5 YPC.

Big Moment Playcalling: Ton of drops in this one again and that’s not on the coordinator. But throwing to your offensive tackle (who just got activated off COVID, no less) and that abysmal 4th down sluggo to Anthony McFarland is just terrible process. Lot of individual and execution issues but overthinking from the coaches, too. Especially in “gotta have it” moments. It’s really costing this team and isn’t making up for the player breakdowns.