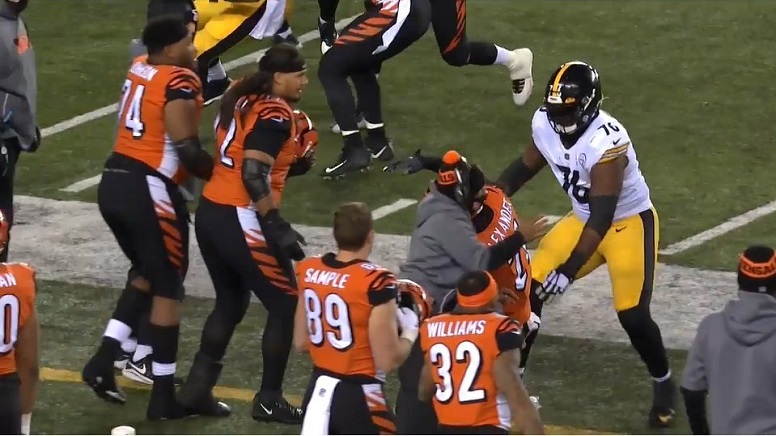 Pittsburgh Steelers tackle Chukwuma Okorafor didn’t’ have a a great game in the team’s Monday night loss to the Cincinnati Bengals and on top of that, the former third-round draft pick out of Western Michigan was fined by the NFL this past week for an incident he was involved in during the second quarter of that contest.

According to Tom Pelissero of the NFL Network, both Okorafor and Bengals cornerback Mackensie Alexander were each fined $10,500 for their actions during the Monday night game in Cincinnati. Okorafor was fined for pushing Alexander into the Bengals bench area after he had high-stepped following his interception of a second quarter pass thrown by quarterback Ben Roethlisberger. Alexander was fined for taunting following a pass breakup with 2:43 left in the second quarter.

You can see Okorafor’s push of Alexander following the interception below. He was flagged for unnecessary roughness for his actions and the Bengals scored three plays after that penalty was assessed.

Okorafor’s Monday night penalty marked the fifth time this season that he has been flagged and the tackle is now second on the team in total penalties and first on the team in penalty yardage against with 55.

Mackensie Alexander with the interception! #SeizeTheDEY

#Bengals CB Mackensie Alexander was fined $10,000 for taunting after a pass breakup in Monday night’s win, while #Steelers OL Chukwuma Okafor was fined the same amount for shoving Alexander into the bench area after he high-stepped on an interception return.