The Pittsburgh Steelers have now released what will likely be their final injury report of Week 16 ahead of the team’s Sunday home game against the Indianapolis Colts and the Friday offering shows that four players are now officially questionable for that contest with one other now ruled out for it.

Not practicing again on Friday for the Steelers was inside linebacker Ulysees Gilbert (ankle) and he’s been ruled out for the Sunday game against the Colts. Gilbert injured his ankle on Monday night against the Cincinnati Bengals. After the injury report was released the team announced that Gilbert has been placed on the Reserve/Injured list.

Ending the week listed as questionable are outside linebacker Olasunkanmi Adeniyi (shoulder), inside linebacker Marcus Allen (neck), kicker Chris Boswell (groin) and running back Anthony McFarland Jr. (illness). Allen has not practiced all week after suffering a stinger Monday night. Adeniyi was limited on Friday after failing to practice on Wednesday and Thursday.

As for Boswell and McFarland, the latter was added to the injury report on Friday after failing to practice because of an illness of some sort. He might not dress Sunday against the Colts. Boswell failed to practice on Friday after being added to the injury report as limited on Thursday. If he can’t kick on Sunday, practice squad kicker Matthew Wright will likely be elevated like he was a few games ago.

Tuitt sat out Wednesday and Thursday but seems good to go for Sunday with him not receiving a game status designation heading into the weekend. Watt also seems likely to play after suffering a concussion Monday night against the Bengals. 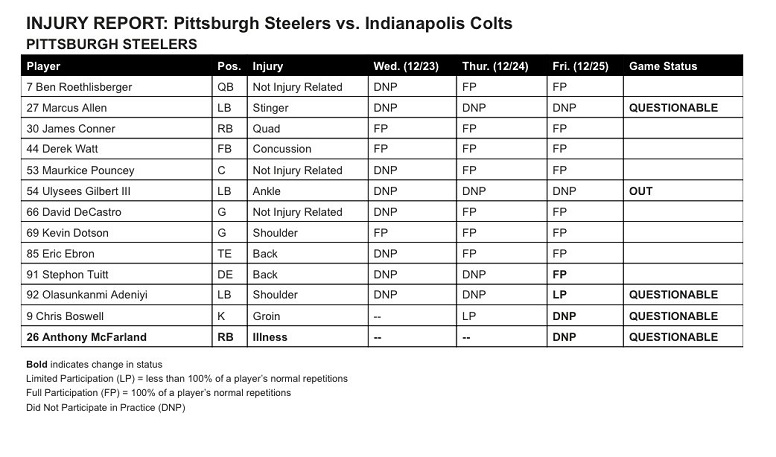