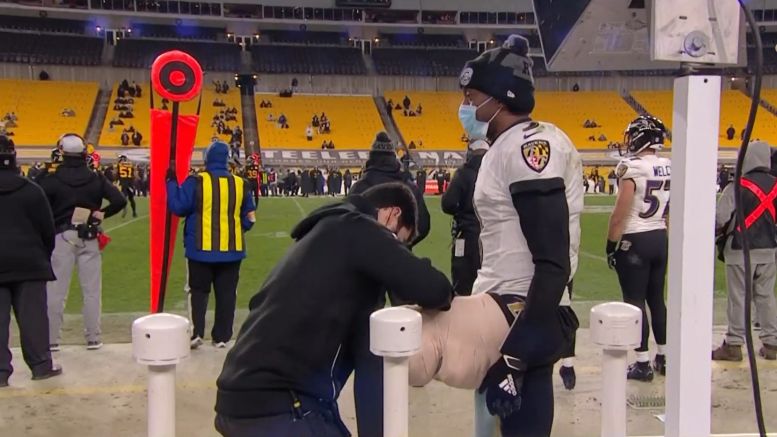 If you’re an athlete and you’re not confident in yourself, regardless of your situation, then you’re not setting yourself up to succeed for whenever you get your opportunities. So it shouldn’t really raise any eyebrows when Baltimore Ravens quarterback Robert Griffin III says that he feels his team would have won yesterday’s game if he didn’t tweak his hamstring in the second quarter, which hindered his mobility and ultimately sidelined him late in the game.

Of course, he also turned the ball over twice early in the game, although it only netted the Pittsburgh Steelers a total of six points. After recovering a fumble off a read-option run design, Ben Roethlisberger threw an interception in the end zone on fourth down. Joe Haden would return Griffin’s next pass for six points—and only six points, after a missed extra point attempt.

“The reason that we lost today, in my opinion, was because of me. Whether it was the turnover or the injury, I felt like I let my teammates down”, the veteran backup told reporters after yesterday’s game, in which his backup, Trace McSorley, brought them to within 19-14 after he had to exit the game.

“I just feel like they needed me to be ‘RGIII’ today, and just as I was starting to do that and helping us win the game – or being in position to win the game – I let them down”, he continued. Griffin came up lame after rushing for four yards on 2nd and 1 on a read-option carry a few plays after converting on 3rd and 11 with a 39-yard scramble.

This was in the late stages of the first half, and they would ultimately get down to the one-yard line, but tight end Luke Willson was unable to hold on to a would-be touchdown pass as time expired that would have given the visiting team a narrow halftime lead.

In all, Griffin only attempted 12 passes during the game, completing seven of them for 33 yards with one interception. But he also rushed for 68 yards on seven attempts—though of course, he also had a fumble.

His mobility clearly suffered after tweaking his hamstring, and he ultimately would have to check out of the game early in the fourth quarter, with McSorley commandeering Baltimore’s offense for the final two possessions.

Would the game have been tighter had Griffin not tweaked his hamstring? It’s impossible to say for sure, but when you have a quarterback like him where running on the read option is a critical component of the offense when he is in the game, hindering his mobility is a major liability.