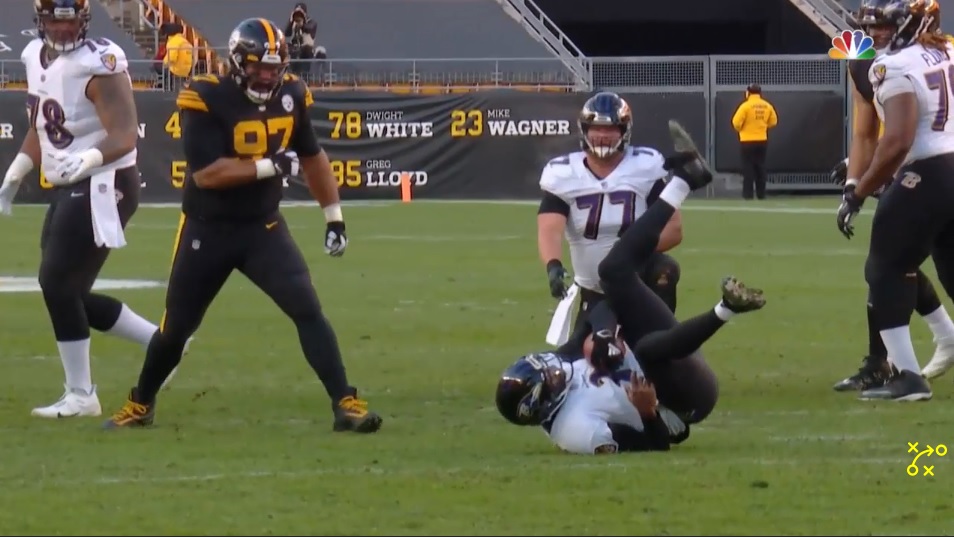 If you’re not used to the fact that the Steelers are going to win ugly – a lot – this year, Wednesday afternoon’s (that’s so weird to type) win over of the AFC North rival Baltimore Ravens, 19-14, probably frustrated you.

Regardless, a win is a win, and the Steelers remain perfect at 11-0 on the season with the Washington Football Team up next.

Against the Ravens though, there were a number of ugly drops offensively – and even a dropped interception on defense, some bad missed tackles, some impressive displays of power by Benny Snell Jr. and JuJu Smith-Schuster, and overall a feeling of lackluster, going-through-the-motions football in the longest week in the history of the NFL.

Wednesday’s game felt really awkward and ultra conservative for Ben Roethlisberger. The first half felt like he couldn’t – or wouldn’t – push the football down the field.

Then, as the game progressed Ben heated up some, but his weapons had stones for hands. I counted roughly eight drops on an afternoon in which Roethlisberger completed 36 of 51 passes for 261 yards and a touchdown.

His first quarter interception on 4th and 1 from the goal line was dreadful and felt a lot like the interception a few years ago in the same position on the road in Denver.

Fortunately, the end zone INT didn’t come back to hurt them.

Snell Jr. got off to a slow start as a runner, but as the game progressed he heated up and started to wear down the Ravens Wednesday afternoon.

Snell Jr. introduced the Ravens to “Benny Snell football” in the second half, powering through a number of tackles as the Steelers grinded out some clock. In the passing game, I was pretty pleased with his ability to create after the catch, which is something I hadn’t seen from him through his first two years.

Anthony McFarland impressed on limited touches too, racking up 26 yards on four touches. As a runner, it seemed like the game slowed down for him a bit, and he forced a key missed tackle on his lone reception to move the chains.

He’s got to clean it up. These types of brain cramp games from him could come back to really haunt the Steelers in a big spot if he doesn’t clean it up.

Chase Claypool also had a couple of big drops and was mostly held in check on Wednesday. Sure, he hauled in six passes, but none of them were really explosive in terms of picking up sizeable chunks of yardage.

I thought Smith-Schuster was really solid Wednesday, continuing to establish himself as a dominant possession receiver that consistently moves the chains. His stiff arm on Tramon Williams was a thing of beauty too.

James Washington should get some sort of accolade for his 16-yard catch in the fourth quarter on a horrendous throw from Roethlisberger between three defenders. That saved the game.

Eric Ebron was really, really involved in the passing game Wednesday, but I counted two drops in the win, both of which were on third down.

Ebron did finish with seven catches for 54 yards, including a terrific 27-yarder down the left sideline through contact to move the chains.

It’s clear Roethlisberger trusts him and feels very comfortable throwing him the football. I just wish the Steelers would let him stretch the field a bit more. Neither Ebron nor Vance McDonald stood out on TV tape as blockers in the run game.

Once again, not much push or execution in the run game, but the Steelers didn’t give up a sack once again. That said, the offensive line gave up some big shots to Roethlisberger, two of which came from Williams on blitzes from corner.

Alejandro Villanueva did a nice job against Yannick Ngakoue, running him up the arc often around Roethlisberger, while Okorafor held up nicely against the power and speed from Matthew Judon.

Inside, JC Hassenauer had an up and down game at center starting in place of Maurkice Pouncey. He struggled against power and speed at times and wasn’t overly impactful in the run game.

David DeCastro and Matt Feiler were rather quiet, while Kevin Dotson, serving as the extra lineman at times, had a poor, poor rep in the run game deep in the red zone that led to a loss.

I thought Cam Heyward really stood out against the Ravens – aside from his roughing the passer penalty on Robert Griffin III (it was a poor call). Heyward stood tall against the run, got after Griffin in the passing game and really set the tone up front.

Tyson Alualu was rather quiet, which likely had much to do with the Ravens running off tackle and on the boundary often. Alualu did have an encroachment penalty called on him in the fourth quarter.

Filling in for Stephon Tuitt, I was pleased with Chris Wormley and Henry Mondeaux, both of which recorded two stops in the game. They looked solid against the run, but didn’t create much rushing the passer.

First off, thoughts and prayers to Bud Dupree, who was likely lost for the season due to a torn ACL injury in the fourth quarter.

Prior to the injury, Dupree was having a whale of a game, especially against the run. Like usually, he was dominant.

Opposite him, TJ Watt was great as well, recording two sacks in the win. He really got after RG3 and set the edge against the run.

Alex Highsmith looked solid as part of the three-man OLB unit with Dupree and Watt, but he did jump offside once.

Inside, Vince Williams recovered a fumble, but overall was relatively quiet. Robert Spillane was a tackling machine, finishing with six.

Aside from the 70-yard touchdown for Marquise Brown, which only occurred due to a missed tackle by Terrell Edmunds, I thought the secondary was rather good on Sunday.

Yes, Minkah Fitzpatrick also dropped an interception, but overall I thought Edmunds and Fitzpatrick were solid on the backend.

At corner, Joe Haden returned an interception for a touchdown and was mostly dominant Wednesday. Same for Steven Nelson, who set the tone for the secondary early with a crunching shot on Justice Hill in the flat.

A missed extra point and a muffed punt helped nobody. Add in a couple of penalties that pinned the Steelers deep in their own territory and it was an ugly day for special teams.

Chris Boswell rebounded from an early missed extra point to drill both field goal tries on the day, while Ray-Ray McCloud shook off the muffed punt to have a decent day on returns.

The two mistakes hurt though, no doubt about it.

The only real standout on special teams was Jordan Berry, who pinned the Ravens inside their own 20-yard-line twice.