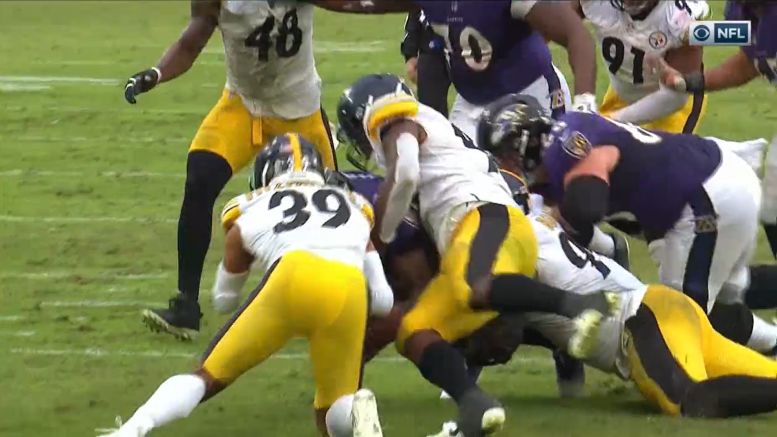 We heard this message pretty extensively from head coach Mike Tomlin when he came out on Tuesday during his pre-game press conference, and he made it clear that that is what he saw on the game tape when he reviewed it the day before.

Over the next couple of days, we heard it from players like Ben Roethlisberger and James Washington, and from other coaches as well. It seemed that everyone was in agreement that they need to be more physical. Free safety Minkah Fitzpatrick, however, doesn’t see that same issue.

“I don’t think it’s necessarily a lack of physicality that led to the things that happen on the last two games”, he told reporters on Thursday. “It’s late in the season and people are a little beat up and whatnot, but I don’t think a lack of physicality is a concern for this defense or for this team at all. We did practice in pads last week. Just to work on being physical and shedding blocks and wrapping up and stuff like that”.

It was pointed out that he attempted to shoulder tackle Buffalo Bills wide receiver Stefon Diggs on one play, and he simply bounced off of the contact and turned upfield for another 15 or 20 yards or whatever it was.

The third-year veteran talked instead about details, and said that it has been their straying from the details that has led to the big plays that they have allowed and contributed to their losses in recent weeks, and in games being closer than they should be—like the late 70-yard touchdown against the Baltimore Ravens.

“It all starts with stopping those big plays that have happened”, he said, adding that it has become a trend they’ve noticed. If they can hold opposing offenses to just one or two big plays, they have been able to have success, but when they allow more than that, because they’ve become inconsistent with their details, that’s when they have gotten themselves into trouble over the course of the season.