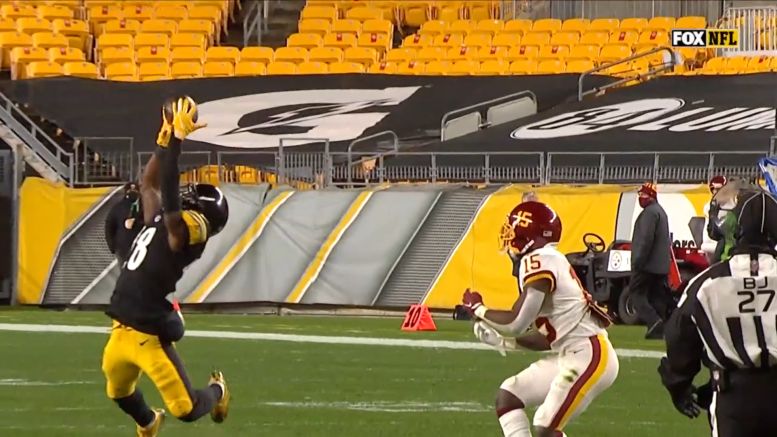 The Pittsburgh Steelers entered today’s game leading the NFL with 23 takeaways on the year. Up to this point, they had recorded at least one takeaway in every game except for the game against the Tennessee Titans, and in fact were riding a five-game streak in which they produced at least two takeaways.

While they still lead the NFL in takeaways, their streak snapped tonight against the Washington Football Team after they failed to record a single turnover, for just the second time all year, only this time it helped to result in their defeat, the first loss of the season, now 11-1.

“We take pride in taking the ball from offenses, putting our offense on a short field and we weren’t able to do that today”, said cornerback Mike Hilton of the defense coming up empty on the day. “We gave up a lot of third downs and put ourselves in some tough situations that we were not able to get out of”.

While they did not get the ball back for the offense, they did have a couple of chances, and Hilton had one of them. Late in the first half, Washington quarterback Alex Smith let a ball go down the field that Hilton had read well. He got his hands on it, but it was a bit high, and he could not complete the play.

Later in the game, in the second half, All-Pro outside linebacker T.J. Watt recorded his first forced fumble of the season, which was a long time coming, considering that he led the NFL with eight last year. Like Hilton, however, he was unable to complete the play, and Washington retained possession.

The Steelers, meanwhile, turned the ball over once, and it came just as they lost the lead. Ben Roethlisberger had a pass batted down at the line of scrimmage—or rather, batted up, and it was caught out of the air, giving Washington possession in scoring position. They went up by six after kicking a field goal and left just seconds on the clock.

While there have been plenty of problems with the offense this year, one of those problems had not been the ability to put points on the board. But one of the reasons that they had been able to do that was because the defense had been providing them with a couple of short fields per game.

They actually did do that once tonight after the defense got a stop on 4th and 1. The offense was ultimately stopped on 4th and goal from the 1, but the defense forced a three and out and then Roethlisberger hit James Washington for a 50-yard score on a one-play drive, so it all worked out in the end.