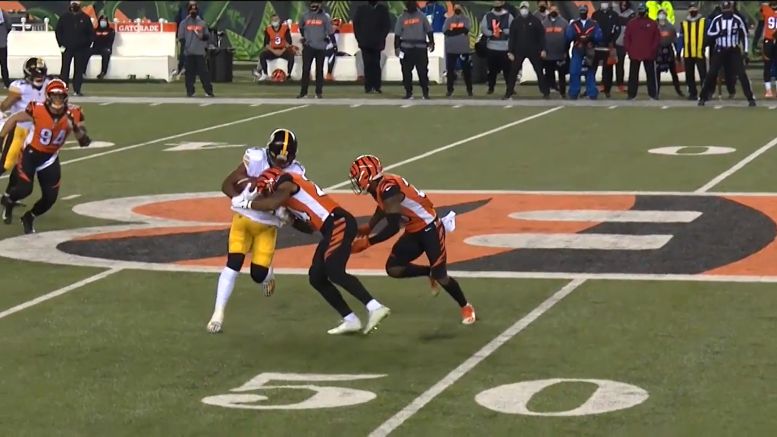 It’s fine to talk the talk as long as you can walk the walk. But when you can’t back up your words or your antics with play on the field, you have to be prepared to accept the consequences. That’s where Pittsburgh Steelers wide receiver JuJu Smith-Schuster finds himself today after weeks of rubbing people the wrong way.

While he maintains that he intended no disrespect with his pre-game TikTok videos featuring himself dancing at center field, which is on top of the teams’ logos, he understands that others did perceive it as disrespectful. And he also knows one such player seized a golden opportunity to show him up on Sunday.

Almost each week, it seems, we learned more and more how widespread Smith-Schuster’s pre-game ritual had become, and how people reacted to it. After it became a bigger story following the Buffalo Bills game, Vonn Bell, the starting safety for their opponents on Monday, was asked about it.

“I just think he’s still young-minded. He loves the game, he loves to go out there and play. But it’s kind of disrespectful at the end of the day”, the Cincinnati Bengals safety said before the game. “They’re on top right now so you can’t really say nothing right now. You’ve got to go out there between the lines and go out there and hit him, and let him know where he stands”.

He got a perfect opportunity to go out there and hit him when a Ben Roethlisberger pass on a crossing pattern left Smith-Schuster exposed to a big impact, losing the ball just as he turned upfield after securing the catch.

The only problem is that the officials missed a clear helmet-to-helmet contact hit, with Bell striking the bottom of Smith-Schuster’s facemask with the crown of his helmet, which is a penalty, as the wide receiver would still be protected in this point of the process. But Smith-Schuster didn’t take issue with the hit.

“Looking at it at first, it was just a good hit. I’ll give it to him”, he told reporters earlier today. “I think the timing, where he was at, where I was at, me catching the football, he made a great hit. I can’t knock him for that. He’s a great safety”.

“We had a call that freed me up”, Bell admitted after initially responding to a question about how the hit came about by saying, “I seen 19”. He said that he read Ben Roethlisberger’s eyes on the play and was able to break on the play before the ball was ever thrown, which can be clearly seen from the replay.

There is a good chance Bell will be a bit lighter in the pocket after that hit, but clearly Smith-Schuster got the worst of it—not just physically, but professionally as well. It’s gotten to the point where he is having other NFL players clown him for it. He has already said that he won’t be dancing on logos anymore.