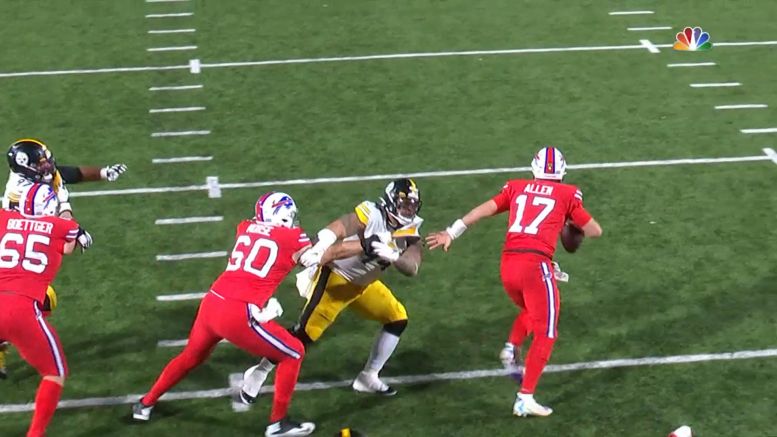 While he didn’t really need any further validating, I think Josh Allen did a lot to prove himself to Pittsburgh Steelers fans Sunday night with the way that he performed in the second half. Facing the best pass rush in the entire NFL—regardless of injuries—Pittsburgh attempted to pressure him relentlessly, but he responded in the way that Ben Roethlisberger does, by getting the ball out in a hurry.

It’s just a continuation of the maturation that he has displayed throughout the year in establishing himself as one of the best young quarterbacks in the NFL, and as a player who is continuing to improve. He has gotten significantly better over the course of each of his first three years, and now has his Bills winning the AFC East—possibly even with the second seed in range, if the Steelers lose again this year.

The Bills are now 10-3, and that has a lot to do with the fact that Allen is a very good quarterback, plain and simple. He was clearly the better quarterback on the field on Sunday night, finishing the game completing 24 of 43 pass attempts for 238 yards, with two touchdowns and one interception, early in the game.

The Steelers were able to get some pressure early on that was effective, and it was the cause of the interception that he threw, but the Bills and Allen made second-half adjustments, and it was just a different game, as he threw two touchdown passes in the third quarter alone, going up by multiple scores.

After picking off Roethlisberger with 7:11 to play, Allen and the Bills were able to maintain possession for the rest of the game and run out the clock, even with Pittsburgh in possession of all three of their timeouts, finishing the drive inside the red zone with a couple of kneeldowns.

The difference? Allen was unfazed by pressure in the second half. T.J. Watt didn’t have much of an impact on the game at all. Neither did Stephon Tuitt. When they did get pressure, Allen was able to step up in the pocket.

His numbers might not look spectacular by the end, and much of that was just because of the play in the first half, which included some drops and adverse weather, but watching the game, it was very evident who was in control of the game.

This is not the same young quarterback that they faced last year, limiting Allen to just 13 completions for 139 yards with one touchdown and an interception, the Bills held to just 17 points—despite winning against a Duck-led Steelers offense.