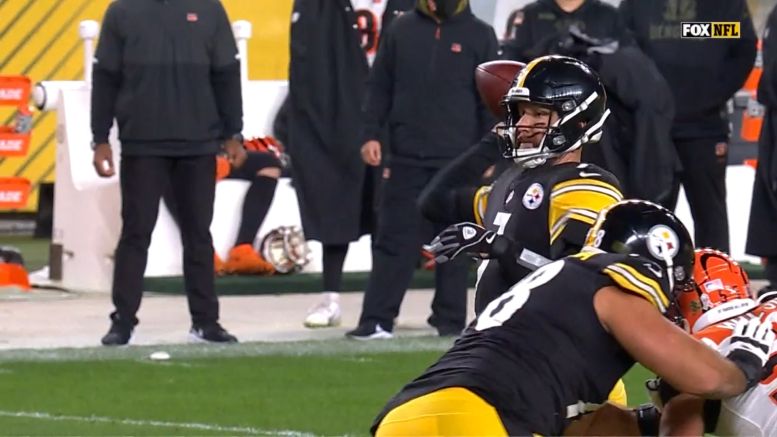 Reasoning: The veteran left tackle, Alejandro Villanueva, just played his worst game of the season on Monday night against the Cincinnati Bengals, and perhaps one of the worst games of his entire career, even if it is not representative of how he has performed over the course of the entire season.

Heading into Monday night’s game against the Cincinnati Bengals, you could fairly and surely accurately say that veteran left tackle Alejandro Villanueva was the Steelers’ best performer along the offensive line this season in 2020.

That’s not exactly a ringing endorsement, given that this hasn’t exactly been a banner year for the group, but the point is that his showing against the Bengals, which in many ways was really kind of awful, is not representative of the overall quality of play that he has turned in this year.

Run blocking has never been his dominant trait—being 6’9” is not exactly your friend when it comes to leverage, after all—but where he really had an ugly game was in pass protection, with Carl Lawson giving him fits throughout the night, even notching a sack, which according to our charting is the first Villanueva has allowed this year.

Another unfortunate lowlight for the big man was a designed screen pass to Ray-Ray McCloud early in the game that looked like it had the potential for a huge game—maybe even a huge touchdown. The only thing that prevented it from being a big play is that Villanueva was unable to block his man getting out to the perimeter.

The good news is that there is no reason to believe this will be a trend for the big man. He will face quality competition along the defensive fronts of the Indianapolis Colts and the Cleveland Browns, to be sure—such as Justin Houston and Myles Garrett—but he will also learn from this game.