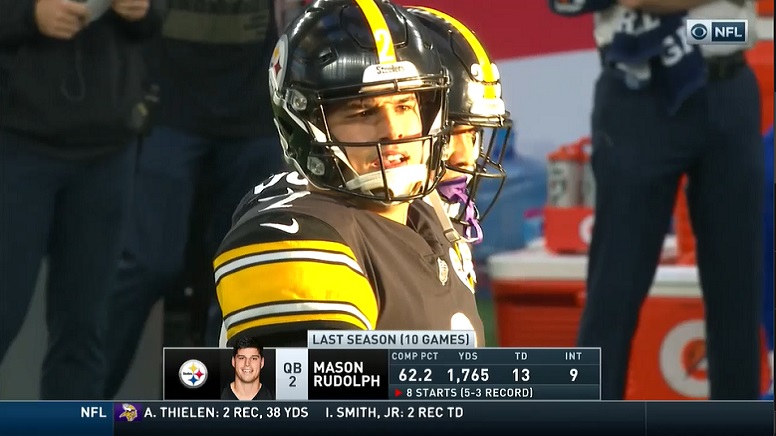 So, will Pittsburgh Steelers quarterback Ben Roethlisberger play on Sunday against the Cincinnati Bengals? That’s ultimately the plan, barring him not testing positive for COVID-19 the remainder of this week. If, however, Roethlisberger is not able to play on Sunday against the Bengals due to COVID-19, Steelers head coach Mike Tomlin indicated that backup quarterback Mason Rudolph would likely be the player to at least start in his place at Heinz Field barring something happening in practice this week.

“You know, we’re going to work both young quarterbacks this week,” Tomlin said on Tuesday. “Mason is going to get the bulk of the work, that’s the position that he’s in, but we’ll play it by ear as we proceed through the week.”

Against the Dallas Cowboys on Sunday, Rudolph closed out the Steelers final offensive possession of the first after Roethlisberger went to the locker room a bit early to get his ailing left knee checked. In total Rudolph played four offensive snaps, all pass plays, and he completed two of his three total attempts for 3 yards. One other attempt, an ill-advised throw back toward the middle of the field to wide receiver Chas Claypool that was tipped into the air and caught by wide receiver JuJu Smith-Schuster for a gain of 18 yards, was wiped out by offsetting penalties.

Fortunately for the Steelers, that final offensive possession of the first half against the Cowboys resulted in 3-points, thanks to kicker Chris Boswell kicking a franchise long 59-yard field goal. After halftime, Roethlisberger took back over at quarterback and played the remainder of the game.

Should Roethlisberger ultimately not be able to play on Sunday against the Bengals, third-string quarterback Joshua Dobbs, who has been inactive for all eight games so far this season, would obviously dress in his place. While Dobbs spent most of the 2019 season with the Jacksonville Jaguars after being traded to them by the Steelers in Week 2, he never played an offensive snap for them. In fact, the last offensive snap that Dobbs played came in Week 14 of the 2018 regular season when he temporarily relived an injured Roethlisberger in the team’s road loss to the Oakland Raiders. Dobbs completed just four of his nine total pass attempts in that game against the Raiders for 24 yards and an interception prior to Roethlisberger returning from his injury.

As for Rudolph, ironically his last NFL start came last season against the Bengals in Cincinnati in Week 12. He played very poorly in that game and was benched not long after halftime in favor of quarterback Devlin Hodges after completing just eight of his 16 total passes in that contest for 85 yards and an interception. Hodges remained the Steelers starting quarterback for the Steelers until he was benched in favor of Rudolph in the third quarter of the team’s Week 16 road loss to the New York Jets.

While Rudolph played well in relief of Hodges against the Jets, an injury forced him out of that contest in the fourth quarter and eventually onto the Reserve/Injured list a few days later. Hodges then closed out the 2019 regular season with quarterback Paxton Lynch serving as his backup.

While Hodges is currently on the Steelers practice squad, it’s very unlikely that he would get any chance to compete this week for playing time should Roethlisberger wind up sitting the Sunday game against the Bengals out for whatever reason. In short, it will be either Rudolph or Dobbs or possibly even both against the Bengals on Sunday should Roethlisberger not be able to play.

“I’m not opposed to playing anybody that increases our chances of winning based on what we’re looking at,” Tomlin said on Tuesday.