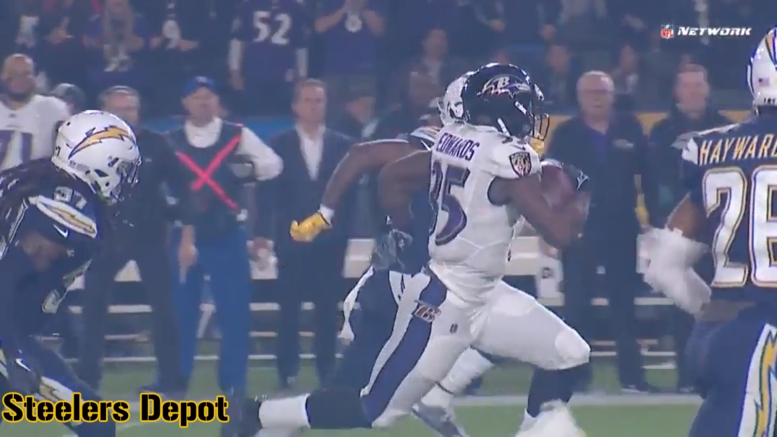 The last time the Pittsburgh Steelers played the Baltimore Ravens a few weeks ago, their hosts put up 264 rushing yards on them. It was the most that they had allowed on the ground in a game since 1993. They did that despite not having Mark Ingram for that game, and then losing Ronnie Stanley and Tyre Phillips along the offensive line as the game proceeded.

They did have J.K. Dobbins, the rookie second-round pick, who recorded his first 100-yard game that day, but they won’t when the Steelers host the Ravens on Thursday. Both he and Ingram are on the Reserve/Covid-19 List and will not be available to play in the game as a result.

Even down two running backs, however, the defense is not taking it easy expecting to handle whatever Baltimore throws their way. After all, they still have Gus Edwards, who was very successful his rookie year in 2018 once Lamar Jackson entered the starting lineup. He rushed for over 100 yards against the Steelers in the season finale in 2019.

T.J. Watt was on the field for both of these past two games against the Raven in which they were successful running the ball, so he knows as well as anyone that their being down a couple of backs isn’t as significant as it sounds. Asked how their game plan changes as a result of what has transpired this week, he said, “not much, to be honest with you”.

“This is such an explosive offense from all facets, and I think the way that they play the game, the amount of motions and screens and explosive plays that they have with everything they can do, it doesn’t really matter who’s playing running back”, he added.

“Those guys have had a great year, but you can put in there the third-string running back and we feel like they can still be very effective running the football and passing the football, so it’s not like we’re laying off the gas pedal by any stretch”.

It is worth noting that over the past three games since losing to the Steelers, the Ravens have only been averaging 115 yards on the ground per game. That’s more than 45 yards off of their season average. During that time, Jackson has accounted for 164 of their 354 rushing yards, but at just 4.4 yards per attempt.

Dobbins has been their lead running back, accounting for 113 rush yards, but on 32 rushes, averaging 3.5 yards per attempt, while Edwards has 71 yards on 21 attempts for 3.4 yards per attempt. As a team, they have only averaged 3.6 yards per attempt on the ground during that three-game span.