The Pittsburgh Steelers have now released their second official injury report of Week 11 ahead of their Sunday road game against the Jacksonville Jaguars and the Thursday offering shows that a several players are moving in the right direction.

The Steelers still have defensive end Isaiah Buggs (ankle) moving in the right direction as he was once again a full practice participant on Thursday. Buggs missed the team’s Week 10 game with his ankle injury.

Steelers cornerback Mike Hilton (shoulder) and running ack Anthony McFarland Jr. both continue to be full practice participants as well. Hilton has missed the team’s last four games and it’s now looking like he’ll return to action on Sunday against the Jaguars barring any kind of setback. McFarland, like Buggs, was held out of the Steelers Week 10 game. It seems like he’ll be back on Sunday as well.

The Steelers still have three players not practicing this week and they are running back Trey Edmunds (hamstring), running back Jaylen Samuels (quadricep) and outside linebacker Jayrone Elliott (illness). Those three players are the ones to watch out for on the team’s Friday injury report as they are all very questionable to play on Sunday right now. 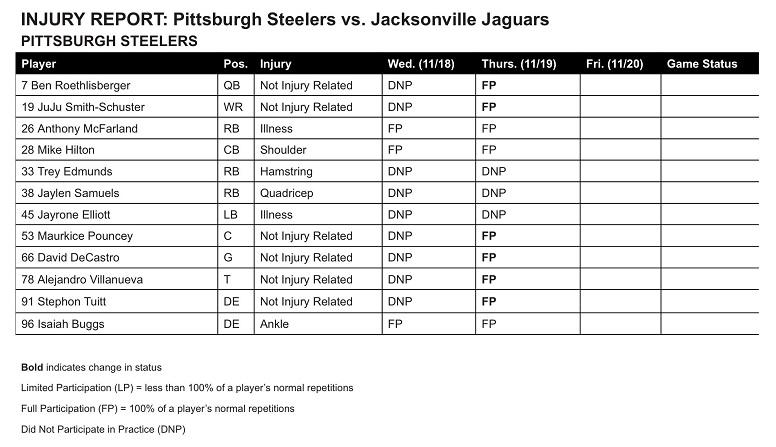