After not practicing on Friday, running back Anthony McFarland Jr. (illness) and guard Kevin Dotson (illness) both end the week listed as questionable for Sunday’s game against the Bengals. Steelers head coach Mike Tomlin addressed the statuses of those two players missing practice on Friday when asked if they are COVID-19 related illnesses.

“No, those are illness-related, but, obviously, being in the heightened circumstance that we are in terms of the intensive protocol, we are exercising all of the proper precautions and not allowing those guys to come to work even though it’s an illness,” Tomlin said.

Steelers defensive end Isaiah Buggs (ankle) and cornerback Mike Hilton (shoulder) both also end the week listed as questionable after being limited in practice on Friday. Tomlin was asked about Hilton’s status after practice ended on Friday.

“You can characterize Mike [Hilton] as questionable,” Tomlin said of Hilton, who has missed the team’s last three games with his shoulder injury. “He’s been a limited participant all week. We will continue to monitor his progress in the last 48 hours toward game time.”

There was good news on Friday for Steelers defensive tackle Tyson Alualu (knee) after he practiced fully on Friday. He was not given a game status designation on the injury report to close out the week and thus he’s now expected to play on Sunday against the Bengals.

“I think that Tyson [Alualu] is in a better place,” Tomlin said after practice. “His participation was a full one today. I have very little reservations regarding his abilities or availability, so he is a go.”

As reported earlier, the Steelers are expecting quarterback Ben Roethlisberger and inside linebacker Vince Williams to both be removed from the Reserve/COVID-19 list on Saturday. There has been no update on running back Jaylen Samuels and tackle Jerald Hawkins, both of whom are also currently on the COVID-19 list as high-risk, close contact subjects. 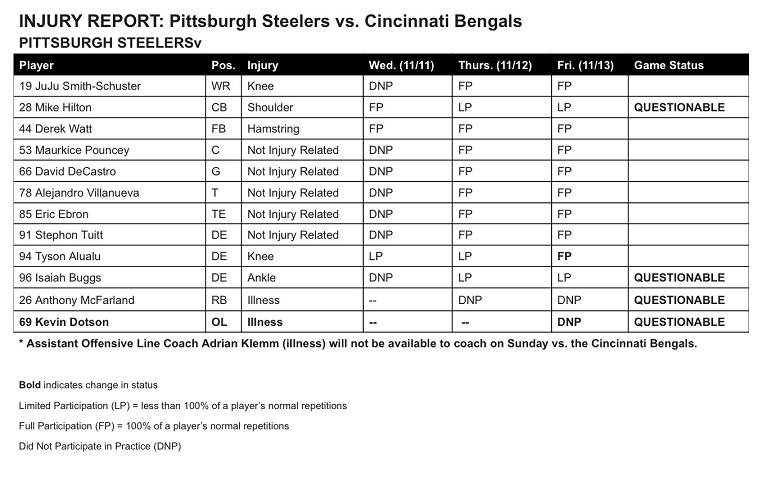