With the victory over the Cincinnati Bengals secured, the Pittsburgh Steelers moved to 9-0 for the first time in franchise history. As is becoming a weekly tradition after the conclusion of the weekend, let’s take a dive into some of the metrics and grades to explore how individual players stacked up against not only the Bengals, but the rest of the NFL. 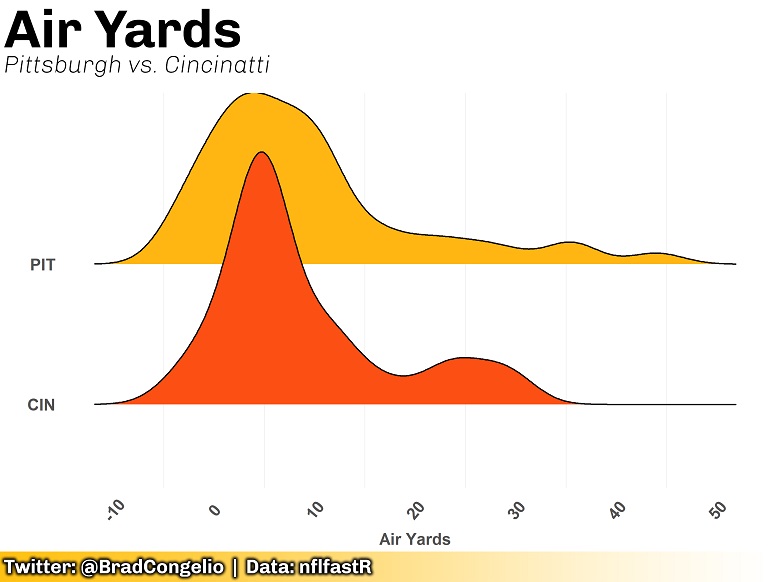 With the ground game all but grinding to a halt against the Bengals, much of the pressure to move the team downfield was placed on Ben Roethlisberger. And he did an outstanding job. As clearly depicted in the air yards graphs (air yards being the distance the ball travels from the line of scrimmage through the air to the point of reception), Roethlisberger did an outstanding job of finding the majority of his targets within the 10-yard distance window.

That distance for Roethlisberger ultimately makes sense, given his ability this season to get the ball out of his hands in a league-leading average of 2.16 seconds. Against the Bengals, his average time to throw was slightly above his season-long average, getting rid of the ball, on average, in 2.34 seconds. That said, Roethlisberger had 31-dropbacks where he got rid of the ball in under 2.5 seconds, which led all of the NFL, and equated for nearly 70-percent of his attempts.

The quick passing worked for Roethlisberger against the Bengals much as it has for him this season. Three of his touchdowns came on passes that were released in under 2.5 seconds and his passer ratings on those 31-dropbacks was an outstanding 109.3.

Bengals rookie quarterback Joe Burrow largely displayed the same distance tendencies as Roethlisberger. However, while Roethlisberger’s short-distance throws were nicely spaced throughout the 10-yard distance window, the vast majority of Burrow’s short-distance throws were in the 5-yard range. That said, Burrow also had a quick release this game, getting rid of the ball, on average, in 2.44 seconds. However, only 55-percent of his dropbacks were quick releases. The others were over 2.5 seconds and ended up resulting in four sacks and a quarterback rating of just 39.6. Needless to say, any pressure the Steelers defense applied to Burrow certainly impacted the rookie.

Of course, we cannot look at an air yards chart without discussing Roethlisberger’s deep ball, apparently an item of contention among Pittsburgh faithful. The air yard chart shows, at surface level, a pretty good performance from Roethlisberger. The graph only tells part of the story though.

In fact, Roethlisberger – based purely on numbers – had quite a poor showing on the deep ball. He attempted to throw down the field 20+ yards on nine plays. Only two of those turned into receptions for a total of 70 yards (not a bad average, if you are a silver lining kind of person). But, completing just 19.6-percent of your deep passes for an adjusted QB rating of 59.5 is worrisome. 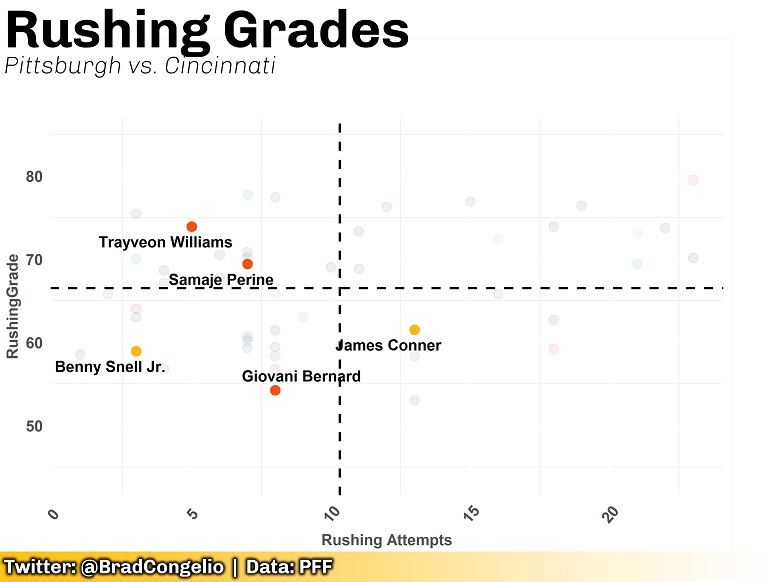 It should not be a surprise that the rushing grades are not a bright spot for the Steelers this week. Both James Conner and Benny Snell Jr. fell far below the league-wide average rushing grade, though Snell certainly has a smaller body compared to Conner. On 13 attempts, Conner mustered only 36 total yards on the ground for a yards per attempt average of just 2.8. With a long run of 16 yards, Conner only broke contact and kept for just 21 yards after contact throughout the whole game (a 1.62 yards after contact average). That simply is not going to cut it, especially when Roethlisberger’s deep ball isn’t exactly keeping defenses honest right now.

Conner’s non-ability to shake tackles is evident in the elusive rating plot: 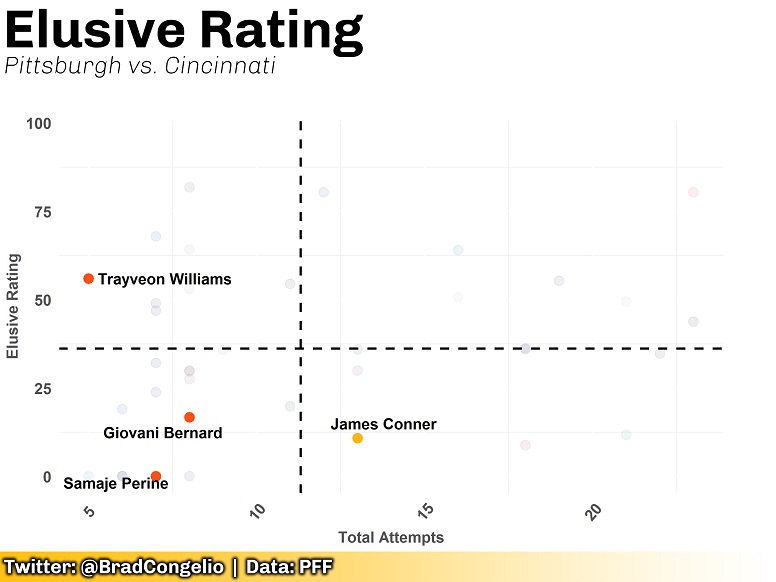 The elusive rating is designed to measure a running back’s impact independently of the offensive run blocking taking place in front of him. To do so, the elusive rating formula takes into account forced missed tackles as well as the yards after contact per attempt average. As you can see, Conner simply did not fare well. This graph, combined with the statistical average of just 1.62 yards after contact, certainly makes for an argument that Conner went down way too easy against the Bengals.

But, was that really his fault, or was the line blocking in front of him simply not opening holes? 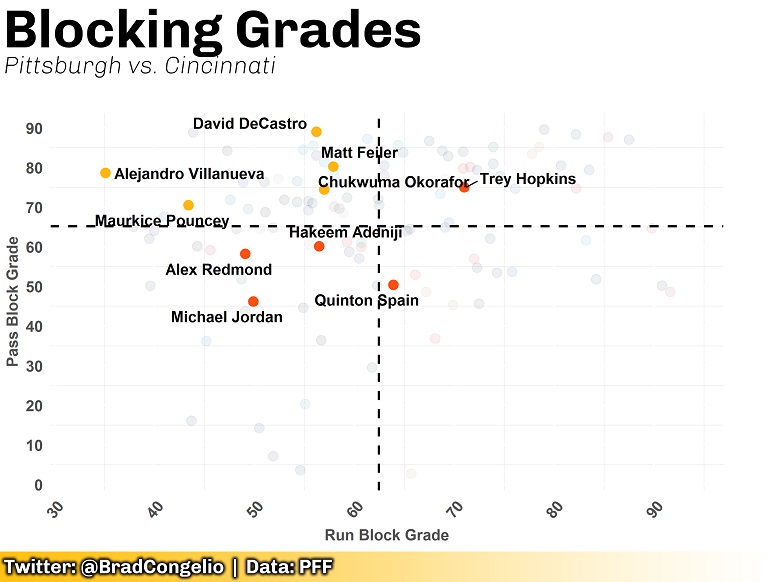 The answer, according to the blocking grades graph, argues that it is a little bit of both. While Conner certainly wasn’t forcing many missed tackles, his run-blocking provided him absolutely no favors. Not a single Steelers lineman ranked above the league-wide average in run blocking.

That said: the offensive line did an outstanding job at protecting Roethlisberger. In fact, David DeCastro and Matt Feiler are among the highest-rated pass-blockers in the league from week 10 with Alejandro Villanueva and Chukwuma Okorafor not far behind. It is promising to see that every Steelers blocker ranked above the league-wide average in pass blocking. But, Steelers faithful would certainly appreciate a shift to the right for all the highlighted yellow dots. And so would Conner. 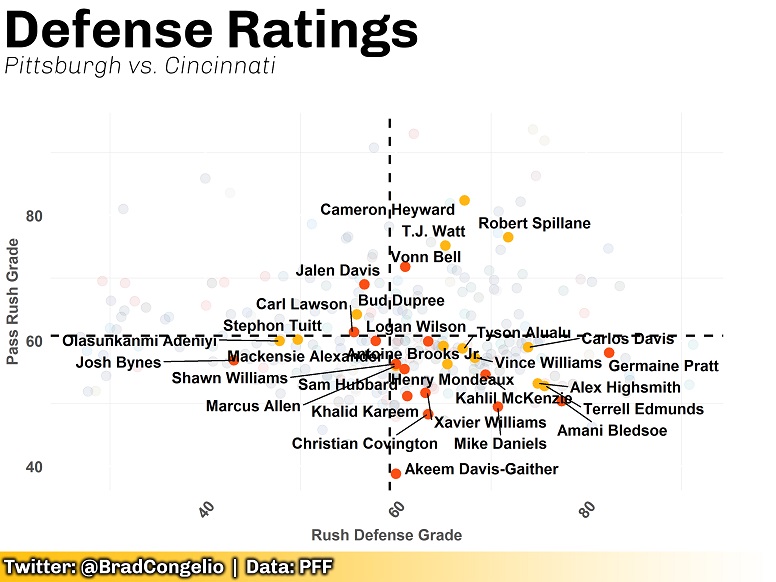 Unsurprisingly, the defensive unit as a whole graded quite highly across the board. Olasunkanmi Adeniyi and Stephon Tuitt are the worst-ranked players on the defensive unit, ranking below the league-wide average in rush defense but playing adequately compared to the rest of the league in the pass rush. Cameron Heyward and T.J. Watt both continue to be the best at what they do. As well, it is very pleasing to see Robert Spillane ranking up there – if not better – than both Heyward and Watt as he continues to step in for the injured Devin Bush.

The return of Tyson Alualu cannot be understated as he immediately made his presence felt on rush defense, ranking as one of the best rush stoppers in the league during week 10. As well, Alex Highsmith and Terrell Edmunds were among the best at stopping the rush. 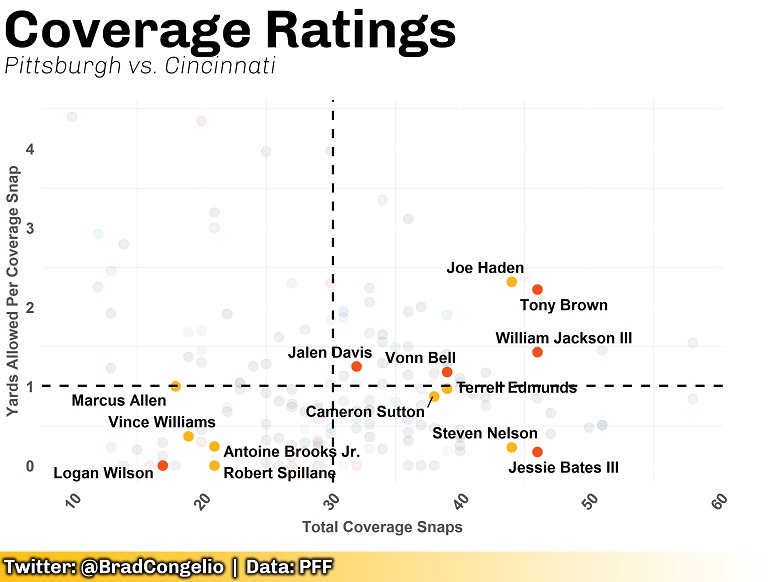 From a defensive coverage perspective, the Steelers fared quite well. Joe Haden had the worst performance according to the grading, but that isn’t saying much, as he still averaged just under 2.5 yards allowed per coverage snap. There were, as evident in the plot, plenty of worst performances in the league throughout week 10. Spillane again came up big for the Steelers as he was not only one of the best run stoppers and pass rushers on the team against the Bengals, but fell back into coverage 21 times and did not allow any yards per snap in coverage. 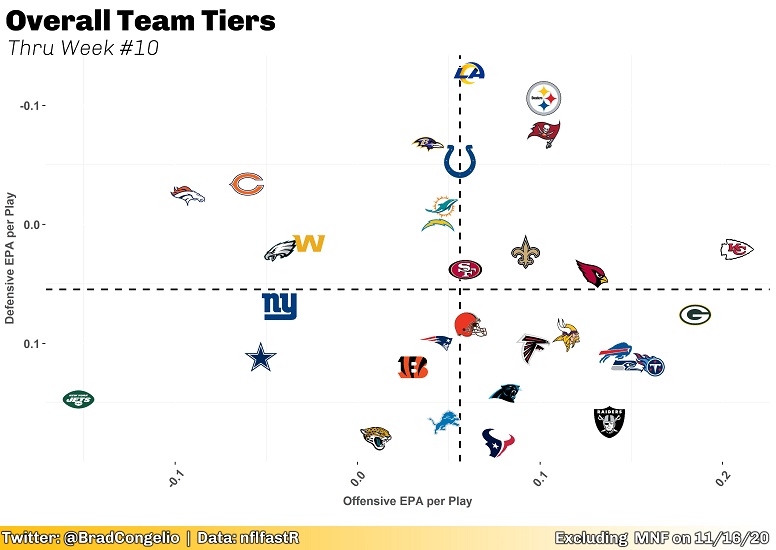 Despite the significant issues in the running game, the Steelers still rank among the most elite – if not the most elite – teams in the NFL. The defense is obviously one of the best in the league. On the other side of the ball, Roethlisberger and his receivers still pack enough of a punch to make up for the weak running game to put up a top-ten offensive EPA per play offense.

If the Steelers can figure out how to get Conner rolling – whether that means correcting issues with him or bettering the blocking up front, or both – all of the other metrics and grades point to the Steelers having the ability of putting together a truly great team.