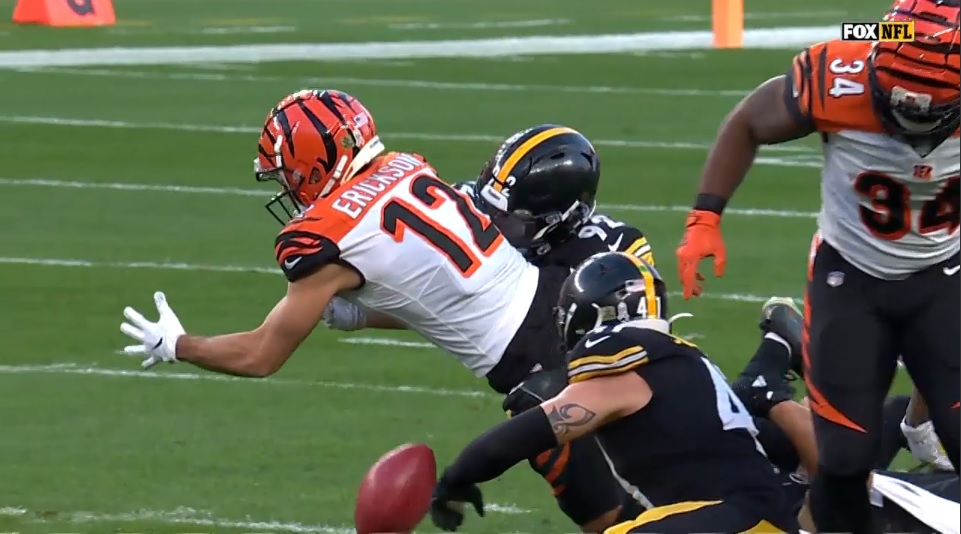 Well, that was much better on the heart, wasn’t it Steelers fans?

The Pittsburgh Steelers cruised to an easy 36-10 win at Heinz Field on Sunday in blustery conditions, moving to 9-0 overall on the year. After missing all week while on the COVID list, Ben Roethlisberger came out slinging, throwing for four touchdowns to pace the Steelers to the 26-point win over the AFC North foe Bengals.

Defensively, the Steelers really got after rookie quarterback Joe Burrow, who had his lowest output of the season with just 213 passing yards. Special teams forced a turnover and rebounded from a rough week, and things all feel well in the Steel City ahead of the Week 11 matchup on the road in Jacksonville.

Once again, Roethlisberger turned to backyard football and pieced up the Bengals’ secondary to the tune of 333 yards and four touchdowns, finding rookie Chase Claypool for two scores, while finding veterans JuJu Smith-Schuster and Diontae Johnson for one score each.

Roethlisberger looked well rested throughout Sunday’s game and rarely forced anything, which is positive for the Steelers. However, he did have a couple balls that should have been picked that were dropped, so he’ll have to clean up a few mistakes.

He also dialed up the deep ball on Sunday, hitting Johnson down the left sideline for 46 yards. He was mostly off throughout the game on the deep ball, but it was great to see him drop one into the bucket to Johnson early to spark the offense.

The stat line for James Conner was ugly on Sunday, but it mostly had to do with scheme and a lack of execution up front from the offensive line.

I have no idea why the Steelers tried to run Conner on stretch plays so often on Sunday, especially considering the lack of early success by the offensive line to get out in front of him.

When the Steelers let Conner get downhill he ripped off a handful of sizeable runs and dished out punishment. It’s so confusing to see them get away from what works with 30.

Aside from his struggles on the ground, I thought Conner was outstanding in pass protection, picking up a handful of free blitzers throughout the game to give Roethlisberger time to find his weapons.

I thought Benny Snell Jr. looked much better in relief on Sunday than he has in recent weeks. He ran hard downhill and was decisive, dishing out punishment.

I counted two drops for Smith-Schuster, but overall the wide receivers were fantastic on Sunday.

Smith-Schuster continues to look like Hines Ward, making the tough catches in traffic and moving the chains. He did a great job working open on his touchdown and made some really physical catches over the middle of the field throughout the afternoon.

Johnson really exploded in the first half, putting up a career day in the process. He’s an absolute technician as a route runner and really cooked Cincinnati’s secondary on Sunday. Plus, that touchdown catch was special, considering his head wasn’t even completely around on the slant route.

Chase Claypool continues to be a red zone monster. If the Steelers could just get Roethlisberger dialed in on some deep shots, I don’t know how you stop this passing attack.

I know there was some concern with Claypool coming out of Notre Dame as a complete receiver (no concern from me), but he’s put every issue to bed. He can run all the routes, can serve as a possession guy and can take the top off of defenses. Plus, he’s nearly unguardable in the red zone. Have fun.

It was great to see James Washington get more run on Sunday, too. He’s really finding himself in his limited opportunities. He was physical after the catch on Sunday too, which is great to see.

Yes, Eric Ebron was solid as a receiver, pushing up the seam for his first catch of the game and then hauling in a one-handed pass from Roethlisberger for 14 yards. Where I had issue with Ebron was as a blocker.

He picked up a holding call and really wasn’t a factor in the running game.

Neither was Zach Gentry in his limited reps, who dressed for Vance McDonald. Gentry was sloppy on the perimeter as a blocker and got no push.

The run game continues to be a real concern, and it starts up front.

There’s simply no push from this group at the moment. They look so sloppy on power and counter, and guys just aren’t bringing their pads behind them when on the move.

I was really disappointed in David DeCastro and Matt Feiler on Sunday. DeCastro looked really sloppy on the move and Feiler looked soft for the third consecutive week. I wonder if something is ailing him because he’s packing no punch.

Alejandro Villanueva had a rough game overall at left tackle in pass protection, struggling with Carl Lawson throughout the game. Lawson recorded a game-high six quarterback hits and countless other pressures.

I’m still a bit disappointed in Maurkice Pouncey overall. It just feels like he’s lost a step or two at center and he’s still having some issues snapping the football cleanly in shotgun, which is puzzling.

Overall though, this group did a decent job keeping Roethlisberger clean on Sunday (no sacks allowed). The lack of a push in the run game needs fixed and fixed fast though.

It was so good to see Tyson Alualu back on the field on Sunday. He helped fix some of the recent run game issues.

Cam Heyward and Stephon Tuitt were mostly quiet on Sunday, combining for just four stops and two quarterback hits, but overall I thought they did a nice job combing to slow down the run game overall.

Inside, Spillane recorded a sack, while Williams was throwing his body everywhere, including a massive hit in space on Perine in the second half.

Avery Williamson got his first run as a Steeler late in the blowout and recorded a tackle. He looked decent flowing to the football in the run game.

Rookie Alex Highsmith continues to put good reps on tape, recording a tackle for loss in the win and also had a great pass rush rep against Quinton Spain that led to Spillane’s sack.

Aside from the breakdown on Tee Higgins’ 54-yard catch-and-run, I thought the secondary was outstanding on Sunday.

Joe Haden really had a great game, breaking up three passes in the win and really taking away one side of the field.

Steven Nelson recorded fumble recovery and really bounced back after a rough game last week. Cam Sutton continues to just make plays when on the field, including his forced fumble on Higgins that Nelson recovered. He also had a tackle for loss in the win, filling in admirably in the slot for Mike Hilton once again.

At safety, I thought Terrell Edmunds played one of the best games of his career. He was everywhere early, making plays left and right, finishing with a game-high eight tackles. He looks so comfortable playing near the line of scrimmage and in space at the moment.

Rookie Antoine Brooks Jr. got some run with the first team defense as well and looked very comfortable overall in the dime backer role. He blitzed with confidence and appeared fluid in coverage.

The fake punt hurts, as does the delay of game penalty that Jordan Berry took, but overall this was a really good day for the Steelers’ special teams.

Berry continues to punt the heck out of the football, averaging 49.3 yards per punt on Sunday on seven punts, including four downed inside the 20-yard line.

In the return game, Ray-Ray McCloud continues to get so close to breaking one. His 42-yard punt return in the fourth quarter set up the Steelers’ final score of the game. I can’t wait to see that return on the All-22.

In the coverage units, what a job by Ola Adeniyi and Derek Watt to wrap up Alex Erickson and force the fumble early in the game, and great job by Snell Jr. to get down there and recover the fumble.

With the fake, fortunately it’s on tape now and the Steelers can correct it. Shout out to Jaylen Samuels for the hustle on the play and to McCloud for cleaning up the mess.